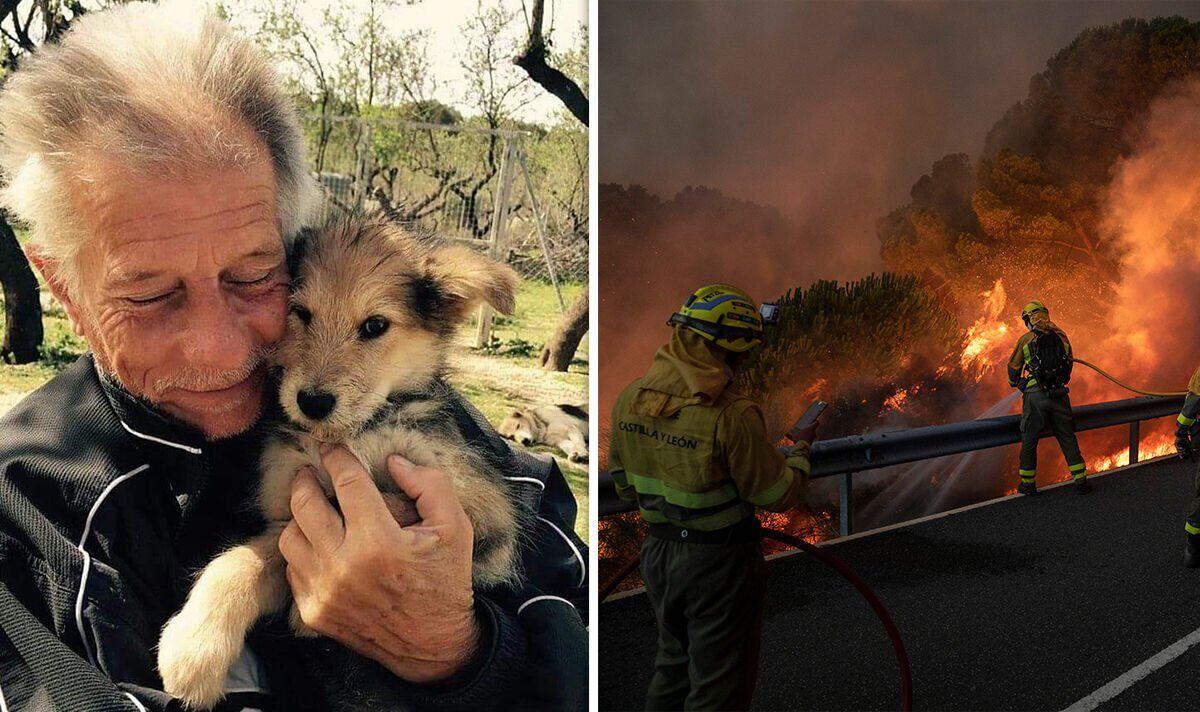 Jeffrey Godsoe, 70, left his life in the UK and spent an estimated £40,000 to build a special shrine in a remote field at Vall D’ebo, near Valencia, Spain, in 2010. Since then, he has housed to dozens of dogs, cats and rabbits as the locals knew him as “the wild man with all the dogs”. Residents from all over the Valencia region were throwing dogs over the fence of his huge compound for Jeffrey to look after. Many of the animals had gone through difficult times, such as abandonment, mistreatment or serious health problems.

But the complex was destroyed on Sunday by a massive bushfire, believed to have been caused by a single lightning strike.

Jeffrey and about 1,200 village residents, including many other expats, were evacuated, but it’s unclear what happened to the animals.

The grandfather of one, from Dereham, Norfolk, fears they may have perished in the fire, which followed a severe heatwave across Europe.

Speaking from her home in Dereham last night, Jeffrey’s daughter Sarah Godsoe, 38, said: “Dad called me today and he was crying. It was horrible. He thinks he’s going to lose all the dogs and it makes him sad. He’s never heard my Dad cried before.

“He built the sanctuary himself. The main complex was there when he arrived, it was basically stone with cement blocks, like a typical Spanish building and painted white. However, he added everything else, building a special place for dogs. He added solar panels It’s all off the grid, you’ve lived most of your life mostly off the grid.

“He lives and breathes animals, so a sanctuary like this is what he’s always wanted. People heard about him there and now locals know him as ‘the wild man with the dogs.'”

Jeffrey, who moved alone from the UK and lived alone in the years since, now lives in his car on a remote road near the rundown site.

The retired owner of the security company has been offered temporary accommodation in a town hall with the other rescued residents, but wants to stay close to his beloved sanctuary.

His family has set up a fundraising website to help Jeffrey through the ordeal.

Sarah, who is a publican in Dereham, continued: “When he was evacuated, my father tried to go back to the sanctuary to save the animals, but the firemen obviously wouldn’t let him.”

“He was unharmed, but we still don’t know what happened to the dogs, or how they are doing. He had over 65 of them, and I saw a short video online that showed I think four were running free when the fire service arrived. but that is all we and he know.

“The sanctuary had massive dog runs through the vineyards. He had put up a chicken wire fence, which was on fire in the photos and video I saw. Everything was on fire.”

“There were different dogs, different breeds. Some had been thrown out of cars on freeways, some had had strokes and been through other painful things. Some were pregnant and had puppies when they were at the sanctuary.”

“They just lived with dad. They would be thrown over the fence because people started learning about dad and the sanctuary. Dad never rehoused any of them, he just wanted them to settle down with him and live the rest of their lives in peace.”

“He’s always had dogs throughout his life, so this meant a lot to Dad.”

The desperate pensioner, who had worked in a furnace in Norwich before becoming self-employed in the security trade, is still unable to climb the mountain due to the police cordon.

Jeffrey spent around £15,000 more to create the shrine.

“It’s a beautiful area with beautiful scenery and rolling hills, or at least it was,” Sarah said.

“It gave quality of life to dogs after being abused and abandoned.

“He let them roam the olive and almond groves, playing freely until his last days. It was my father’s life’s work, his heart, his soul, the air he breathed. The look in the dogs eyes when they knew that they would be loved from now on.

“Now he’s sleeping in his car. He’s homeless and scared.”

The fire started late Saturday night, and Jeffrey was evacuated around 12:30 a.m. Sunday.

Sarah said her father grabbed some clothes, his phone and opened the doors in a desperate struggle to let some animals out.

She said: “The support we’ve had has been great. I run a pub and the locals have been very supportive.”

“We’ve already received some wonderful donations. About 50 percent of them are from friends and family, but I don’t know who the rest is from. It’s really amazing and overwhelming to see such support.”

To donate to the appeal, click this link: https://www.gofundme.com/f/fires-destroyed-dads-dogs-sanctuary