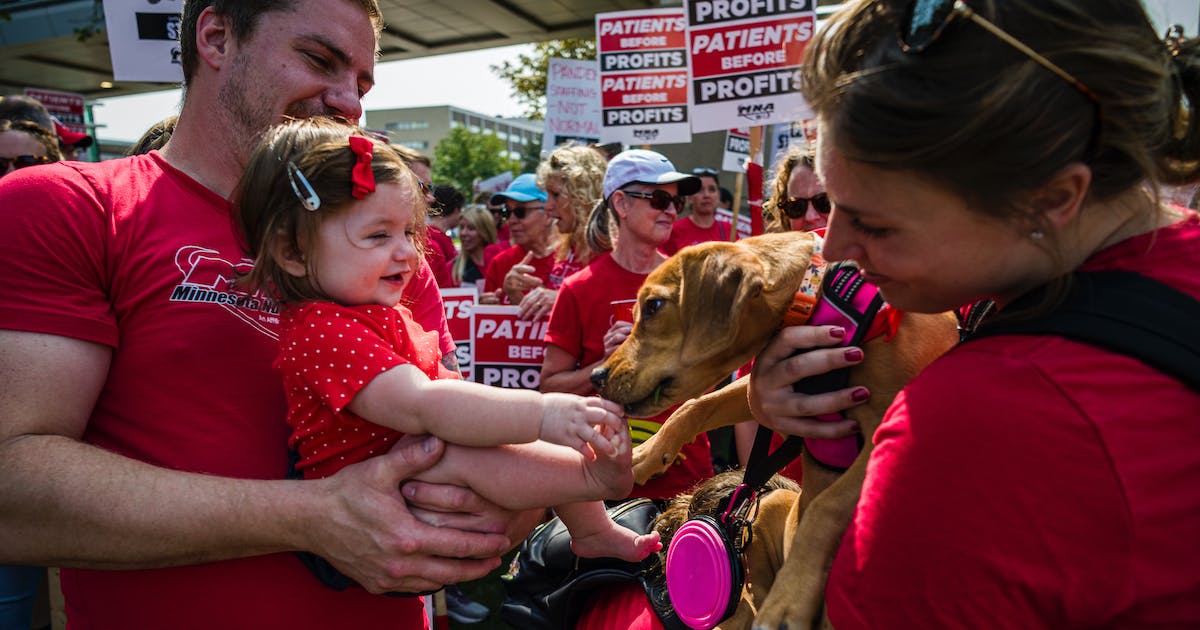 A historically large nursing strike ended with its last full day of picketing on Wednesday. Whether he reshuffled testy contract negotiations with the Twin Cities and Duluth hospitals over salaries and staffing remains to be seen.

Hospital nurses used the work stoppage to advocate for increased staffing and solutions to a nursing shortage that puts patients at risk. Jeff Bluem took her restless 11-month-old daughter to the picket line outside Southdale Hospital in Edina, then lamented the quality time he misses with her when he’s forced to work short-staffed nursing shifts.

Hospitals are stretching staff to a minimum and relying on nurses to feel compelled to help at a moment’s notice, said Blue, who works in a neurological unit at Methodist Hospital in St. Louis Park. “We have older patients. A lot of them have dementia. A lot of them have a higher risk of falls because of their strokes. Leaving nurses short-staffed is not going to be safe for these patients.”

Some 15,000 nurses went on strike for three days at 15 hospitals, including Methodist and Southdale, as well as North Memorial Health in Robbinsdale and others at Allina, Children’s and Fairview health systems in the Twin Cities. Strikes by nurses from the Minnesota Nurses Association (MNA) also occurred at St. Luke’s and Essentia hospitals in the Duluth area.

The affected hospitals kept their public statements this week focused on their efforts to keep patient care safe with replacement nurses during the strike and on the current salary of their regular nurses.

“Nurses in Minnesota are among the highest paid in the nation, regularly in the top ten among all states,” said a statement from several of the Twin Cities negotiating hospitals. “The average Minnesota nurse earns $80,960.”

The strike followed months of failed negotiations, which left nurses asking for pay increases of around 30% over three years, while hospitals offered around 10% over three years. They also sought more authority, including the ability for a majority of nurses in a joint committee to block any changes in hospital staff that they deemed unsafe.

“If you can’t convince 50% of your nurses to change staff, then maybe you shouldn’t do it,” said Mary Turner, MNA president and critical care nurse at North Memorial.

One key when negotiations resume is whether a combination of staff and salary commitments will produce a contract or whether one issue will be sacrificed for the other. Staffing demands were sacrificed in 2010, when 12,000 Twin Cities hospital nurses went on strike for one day and struck a contract that increased wages and preserved pensions and benefits.

Hospital negotiators have delved into both issues, calling nurses’ pay demands “unrealistic, unreasonable and unaffordable” at a time when their systems are losing money. They also don’t want to give up majority control of staffing decisions, pointing out that nurses already help set staffing levels and have a contractual right to mediate disagreements.

Bluem said something needs to change beyond pay, because nurses can earn more money through extra shifts or the lure of highly paid itinerant nursing. The apparent ability of hospitals to weather the strike this week is proof that they can do better, she argued.

Staff shortages were a common lament on picket lines, which were otherwise sunny and festive, with red-clad nurses strolling to music and bringing children and dogs along with protest signs. But in the midst of unity, there were different opinions.

Rita Decker, an ER nurse at North Memorial, said she would prefer to maximize pay rather than trade it for staff plans that could have loopholes. Even if hospitals agreed to increase staffing, they would be constrained by a nationwide shortage that already has them aggressively recruiting new nurses.

Nurses at all 15 hospitals opted for a three-day strike to increase financial pressure but minimize pain for patients. Nurses at the smaller Essentia hospital in Moose Lake, Minnesota, chose to withdraw strike plans and hold picket lines instead.

No research has assessed whether time-limited strikes are as effective as open ones, but they are becoming more common and offer the advantage of limited financial pain for workers and less chance of employers replacing them, said Johnnie Kallas, Director of Labor Action. Tracker at Cornell University. The doctoral student is studying strikes in the US and what influences workers’ profits or losses.

“The downside is that they require nurses to return to work unconditionally at the end of the strike and they may not force a deal, meaning negotiations could drag on for weeks or months,” she said.

The strike will be expensive, though its price tag could be less than the $149 million Allina paid in 2016. Allina’s nurses went on strike for health benefits for seven days that summer and then returned to the picket lines falling in love with a indefinite strike. which lasted 37 days before reaching a contract.

The bill will be in the tens of millions at least from the latest strike, considering hospitals paid between $7,000 and $12,000 per replacement nurse this week, plus travel, lodging and training expenses.

“They could have put a fraction of that on the nurses behind me and our patients” to prevent the strike, said Angela Becchetti, a nurse and union negotiator at Abbott Northwestern Allina Hospital in Minneapolis.

Some hospitals will pay double at the end of this week, because they hired the replacements on five-day contracts, but will only use them for three days and put their regulars back on patient care.

Allina announced that her regular nurses would return to work starting at 7 a.m. Thursday at Abbott and its Mercy campuses in Coon Rapids and Fridley. An earlier strike notice meant nurses at United Hospital in St. Paul had to return at 6:30 p.m. Wednesday.