The Guide Dog Foundation at JFKIAT on Giving Bark Thursday 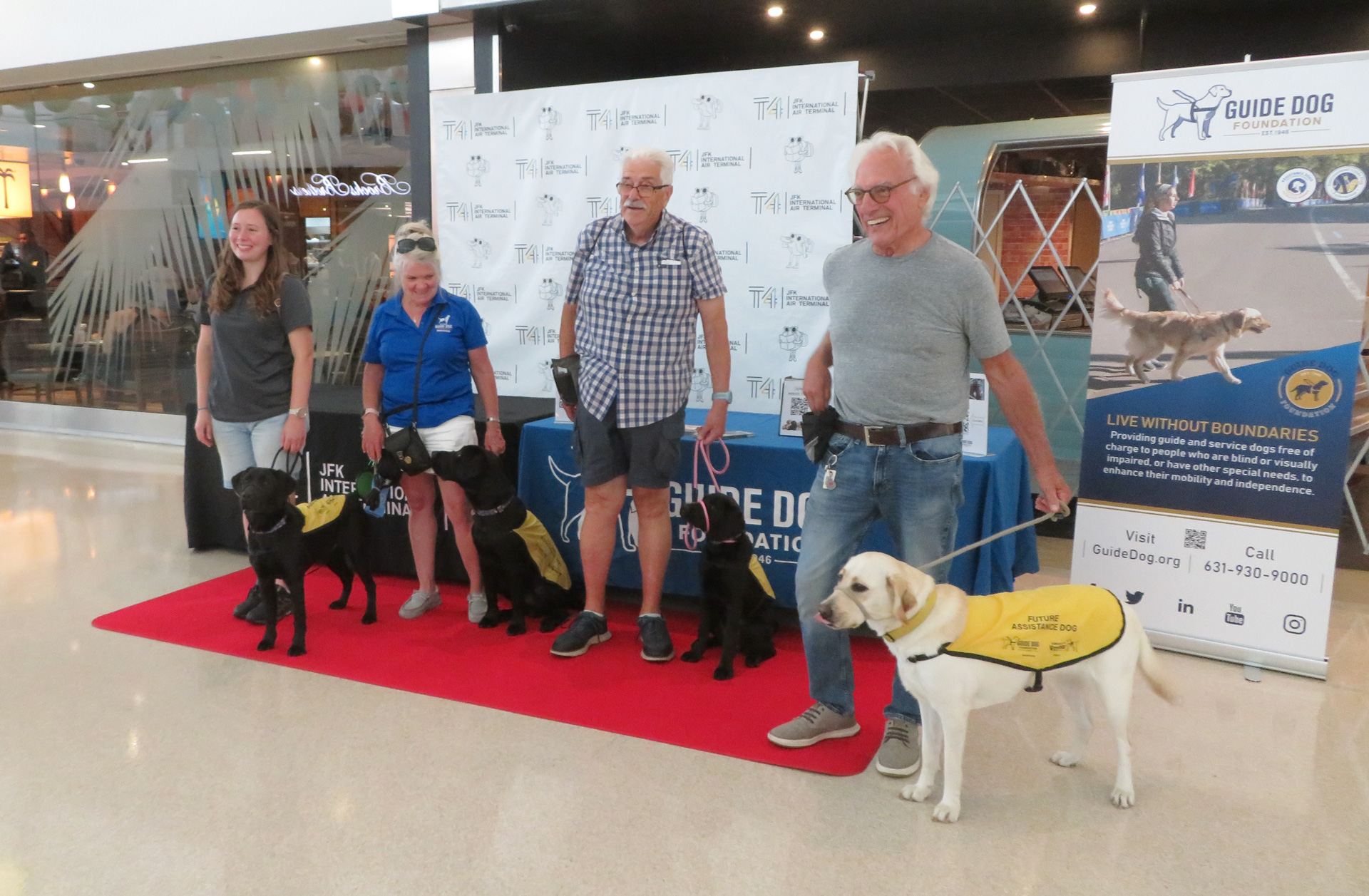 JFKIAT, the operator of Terminal 4 at John F. Kennedy International Airport, has partnered with The Guide Dog Foundation of Smithtown, NY, to host a puppy class for volunteer puppy breeders at JFK T4. The class introduced four future guide dogs in training to TSA security and the busy sights, sounds, and smells of an airport to provide socialization and exposure to everyday situations in a busy airport terminal so the pups can become safe guide dogs for someone who is blind or visually impaired. The partnership between JFK T4 and The Guide Dog Foundation is dedicated to giving back to the community and supporting the Foundation by providing a unique place for future guide dogs to train.

The most common breed of guide dog is the Labrador Retriever, as they are outgoing, even-tempered, friendly, intelligent, agile, confident, and eager-to-please hard workers. All four puppies in attendance were Labrador retrievers. The class at JFK Terminal 4 consisted of exercises that focused on building confidence, comfort and a positive experience in the environment in which they work, rewarded with praise through the puppy breeder’s voice, a behavior calm and upbeat and training treats.

Jamie Shrewsbury is a Marketing Associate at The Guide Dog Foundation. Standing next to a small kiosk set up at JFKIAT, he explained how the Foundation raises, trains and places all of its guide and service dogs. Puppy breeders typically keep their dog for 14-18 months, at which point the puppy returns to the Foundation campus where they receive formal training, which is a process of approximately 3 months. During the time the puppy is with their breeder, they attend puppy classes, meet other puppy breeders in the area, and participate in a variety of events that get them used to the different sounds, smells, and environments they are going to have. to be used and ready for when they go and are with someone who is blind or visually impaired.

Puppy breeders Evelyn and Peter Koestenblatt of Bellerose Village attended the class in Terminal 4 with Remi, a one-year-old yellow Lab. Remi is her second pup with The Guide Dog Foundation. When asked how they got involved as a puppy breeder, Peter said: “We’ve always had dogs and I’ve always done a lot of volunteer work, so I thought when I retire, would be a good combination. So I looked up some volunteer opportunities and found The Guide Dog Foundation, which is in Smithtown and the closest to where we live.”

Their first puppy was named Ángel, who was with them for two years due to the pandemic. During that period of time, Peter said, “As much as we taught her, she gave us so much back and it was really a perfect moment for us.” Angel completed the program and became certified. He is now working with a gentleman in Seattle who is blind from birth. He previously had always used a cane and never had a dog as a companion. Later, Peter and Evelyn had the opportunity to speak with the man who greeted Angel, and the only thing that stuck with them was how he spoke of the profound changes he experienced personally having Angel with him after only a week. Of his conversation, Peter said: “It was really amazing. He wasn’t sure if he would raise another cub. It was a lot of work… but to be honest, after hearing from the man Angel is now with and seeing what our family did, it was the icing on the cake. And now we’re lucky enough to have Remi, who we’ll have another four or five months until she completes all the training, which we think she will. And we will definitely do it again!”

Sharon McComb attended the class to help celebrate Giving Bark Thursday. With her was Lindsey, a 7-month-old black Lab. Sharon is a puppy advisor at The Guide Dog Foundation and serves as a support system for all puppy breeders in Suffolk County on Long Island. Lindsey, who is growing up in Pennsylvania, has never been to Long Island, so while her puppy breeder is on vacation, Sharon is working with her on the island and says it’s been a really good experience for Lindsey, who is doing very well.

As for the most satisfying part of her job, Sharon said: “When it comes to raising puppies, it’s really very rewarding to have a puppy that finally gets laid. because you know that it is without a doubt the most selfless thing that you can do because you dedicate a year and you give your heart to this dog, and then they become the world; they become a pair of eyes for someone else. It’s a heartwarming thing to be a part of, both as a breeder and as a puppy consultant. As a breeder, you have a dog that you spend your time with, and as a consultant, I can work with 60-80 dogs at a time, so I only get a small part of all these dogs, and it’s so nice to have a job and a role. volunteer that is so impactful. you don’t do it often to find a way out in life that is so satisfying.

At JFKIAT, fostering a safe and hospitable environment for everyone within Terminal 4 is of the utmost importance,” said Ed Midgley, vice president of business and customer experience for JFKIAT. “We are proud to partner with the Guide Dog Foundation to provide a space where future guide dogs can acclimate to an airport and receive vital training that will help those who are blind or visually impaired, and we look forward to continuing our partnership with this fantastic base.”