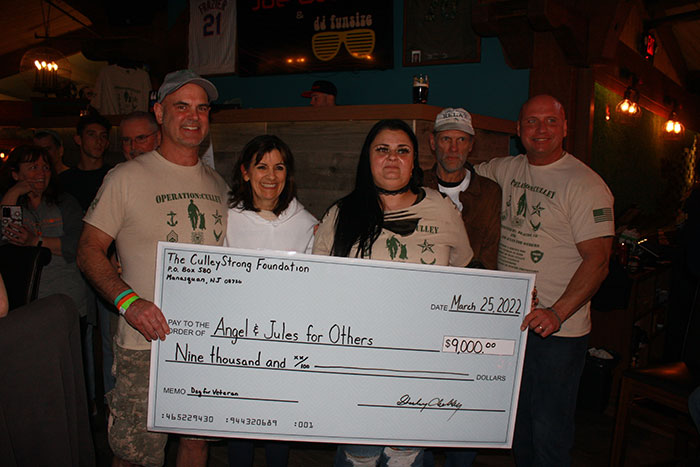 BRICK – In memory of Brick resident Sean Culley, a non-profit organization made in his name is doing what it can to help others through education, suicide prevention and mental health awareness.

The CulleyStrong Foundation was created in 2019 in honor of Sean, who took his own life that same year.

“The foundation was started in memory of Sean Culley, who was 19 years old at the time and a freshman at the University of Kentucky. He was my son’s best friend since he was about 4 years old,” said Jim Clabby, one of the founders of the CulleyStrong Foundation. “Unfortunately, Sean committed suicide in January 2019. Thus the CulleyStrong Foundation was born. My wife, my friends, and Eileen and Stephen Culley, Sean’s parents, all wanted to do something and raise awareness about mental health issues. Sean had dealt with some depression and that’s what ultimately led him to do what he did.”

For the past three years, the local nonprofit has been advocating for mental health awareness and suicide prevention.

“The foundation was started with the goal of raising awareness about mental health and doing everything we can to start reducing suicide statistics. Especially among the young,” Clabby added.

The nonprofit organization has done several projects locally to spread awareness and support the community, such as donating magazines to help people with mental health problems and paying for therapy sessions for those who cannot afford it. . On March 25 they presented their biggest project to date.

After partnering with other local organizations, the CulleyStrong Foundation was able to purchase two service dogs and give them to local veterans in need.

“What CulleyStrong did was buy two dogs and they were both featured at the ‘OPERATION CULLEY’ event for local veterans in need who are dealing with PTSD,” Clabby said. “The money for the purchase of a dog was raised through a 5K event we had in July 2021. It was very successful and they raised enough funds to purchase the service dog. The second service dog was purchased directly from a donation.”

Veterans are recruited through another local nonprofit organization, Angel & Jules for Others, where they receive referrals from those in need. They go through a process of matching a dog to the person before they can donate the service dog.

“It is a great company. The other nonprofits that were involved in this, the main one being Angel & Jules, they work with a specific dog trainer and a dog is selected based on the person’s needs,” Clabby explained.

The event drew a large crowd of people who wanted to support a good cause, along with veterans Annie Wilgosz and Don Redondo, who were officially presented with their service dogs. Additionally, a K9 dog was presented to the Middletown Township Police Department.

“Seeing these veterans in need get these dogs that can change their lives is pretty amazing. They couldn’t have been more deserving. It really was a great evening, and the CulleyStrong Foundation is very happy that we were able to do this,” said Clabby. “Of course, none of this would be possible without our very generous donors and supporters, and we thank them very much. We look forward to continuing to help our local veterans and others in need who are dealing with mental health issues.”

“I know Sean is looking down and very proud of what his namesake foundation is doing – continuing his natural way of helping those in need,” Clabby added.

The CulleyStrong Foundation will hold its second annual “You’re Not Alone” 5K Run and Walk on June 25 at the Wall Township Sports Field in the Township Complex on Allaire Road.