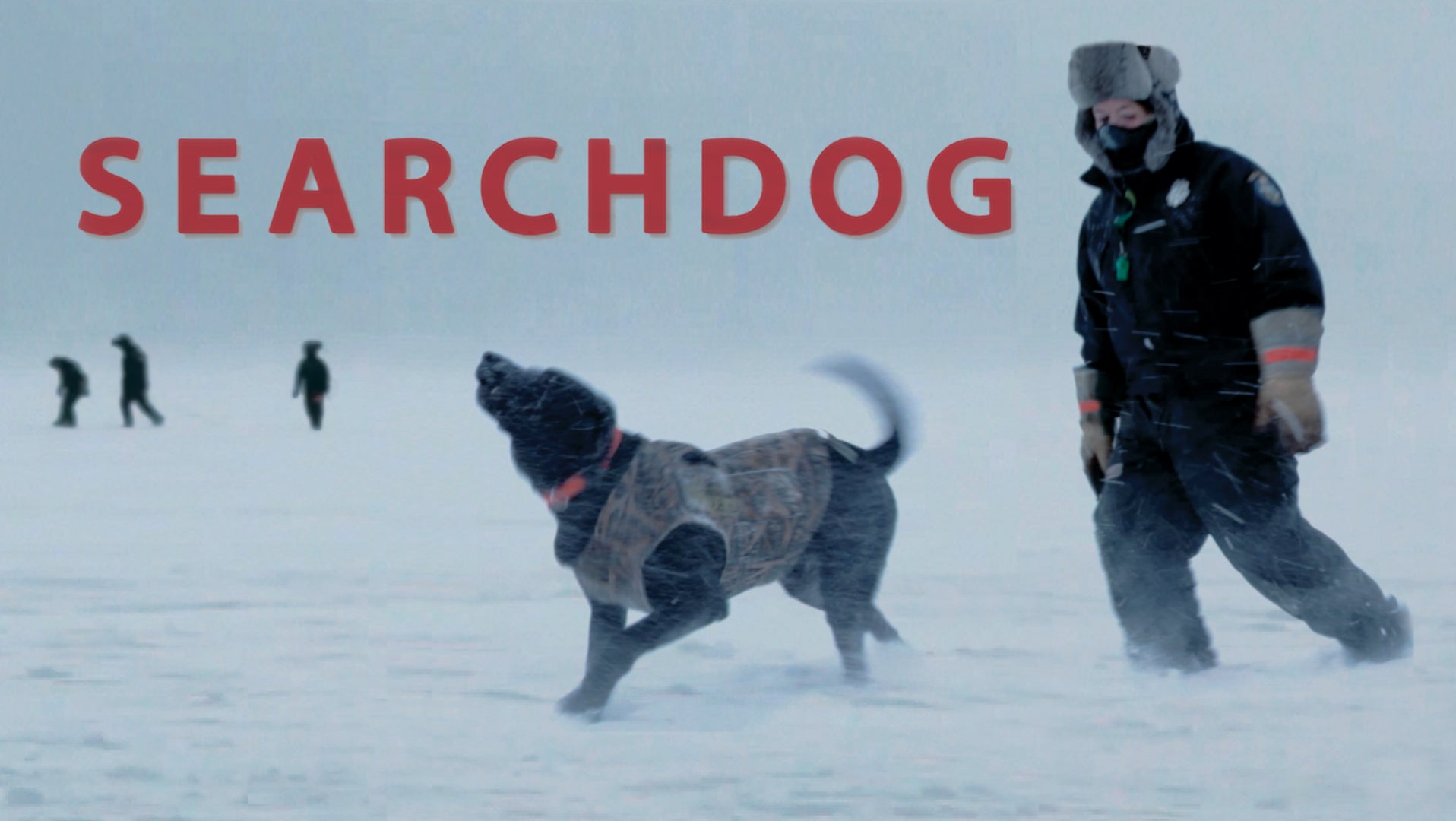 KINGSTON – July 22, 2022 – “SEARCHDOG,” a feature-length documentary from University of Rhode Island professor Mary Healey Jamiel and executive producer Elaine Rogers, will premiere in Rhode Island on Rhode Island PBS on Friday, July 22 at 8 pm will also be broadcast on Saturday, July 23 at 12 noon and 11 pm

“SEARCHDOG” tells the true story of Ruby, a border collie/Australian shepherd mix, rescued from the Rhode Island Humane Society just hours before she was euthanized. Returned to the shelter five times due to her ‘aggressive’ behaviors, she became an excellent search dog thanks to Zarella. Her story, detailed in the documentary, became the basis for the Netflix movie “Rescued by Ruby,” released earlier this year.

“It’s great and I’m so excited and honored that ‘SEARCHDOG’ is on Rhode Island PBS so that Rhode Island audiences can learn the true story of Ruby’s beginnings with Matt Zarella rescuing her, along with Joe Warzycha of the Rhode Island SPCA. Healey Jamiel said. “Often in Hollywood, stories need to be told more simply, and I respect and appreciate that, but what I think Rhode Islanders will really appreciate is how much it cost to rescue Ruby and how much effort our local shelter and Matt Zarella put in. . on her becoming a hero dog.”

The process of making the film took approximately five and a half years. Healey Jamiel began working on “SEARCHDOG” in April 2010 and began filming that August, when she was called on her first search-and-rescue mission: the search for a little boy who went missing in Woonsocket, who was found safe and returned. to his family thanks to the dogs. Healey Jamiel was on call with the team for about four years.

Life on a K-9 search and rescue team is exhausting, unpredictable, and often traumatizing, but it can also be incredibly rewarding. When a dog locates a missing person or human remains, it brings relief and a sense of closure to his or her loved ones. Training is difficult and handlers have to work hard to keep the dogs happy, even when the work is devastating. Healey Jamiel took on the gargantuan task of filming that, shaving years of work into 84 minutes.

“It was a very good lesson for me,” he said. “I had to translate that story for the average viewer and give them a sense of the pressure, the stress, the commitment that these handlers feel along with their commitment to their dogs. It was a real challenge, but satisfying.”

The call for a mission could come at any time (days, nights, holidays, weekends, vacations) and Healey Jamiel had to be ready to drop what she was doing at any moment to go and join the team, camera in hand. . .

“Being on call was an interesting challenge. At first I felt like I was on Mars: in a different country, I didn’t speak the language, with only the vaguest and most superficial notions of what the job was. But it was great.” she said. “My students were very understanding as they would often call me outside of my classroom or outside of a meeting or outside of a family gathering. It gave me the real inside experience of these K-9 handlers, because they are on call 24/7.”

Fresh off working on “Holy Water-Gate,” a documentary that investigated the cover-up of child sexual abuse in the Catholic Church, she was looking to focus on something a little lighter for her next film. Initially, she was inspired by his own husky, who, although “didn’t look anything like an obedient search dog”, was quite intelligent.

While the work that dogs and their handlers do is truly inspiring, Jamiel Healey found that assuming their work wasn’t traumatic was unrealistic. Following the advice of fellow URI professor Lynne Derbyshire, Healey Jamiel sought therapy while she worked on the film.

“I was a bit naive. If I had really thought about search and rescue and the reason for it, why these dogs do what they do, it’s because of serious and terrible things,” he said. “I had to learn to process seeing things that most civilians wouldn’t see, but these officers see all the time. What I learned in this world was that search and rescue people, what they see in a week or a month, would mark most of us for life.”

Healey Jamiel developed good relationships with Zarella and her K-9 handler trainees. The process of training a search dog is long and requires time, dedication and, above all, patience. The class she filmed included three Maine State Troopers and her dogs, as well as Ruby and her guide, Police Officer Daniel O’Neil.

In journalism and film, it’s important to set and maintain boundaries between yourself and the people you cover. It’s a little harder to do that with a dog, Healey Jamiel explained.

“Those boundaries are strong and they are very important because that is where trust comes in, in honest professionalism,” she said, “but with these dogs I was a complete fool. They just love when you are who you are, and I had no boundaries with them, so I got too attached to them emotionally.”

Two of the dogs featured prominently in the film, Maximus (whom Zarella took to Vietnam to search for the remains of missing soldiers) and Ruby, have sadly passed away; Maximus in 2011 and Ruby very recently.

Although filming ended nearly seven years ago, Healey Jamiel has kept in touch with the officers he worked with. After Ruby passed away, she and Zarella’s family got together for dinner to celebrate Ruby’s life. She also keeps in touch with the Maine troops.

Healey Jamiel had many of her URI Harrington School students work with her during filming and post-production, including on festival releases that garnered multiple awards and prestigious invitations across the country and led to the film being released to Apple and Amazon in 2018. As a filmmaker and teacher, she wants people who see the film to understand the tremendous effort and personal risk involved in searching and rescuing K-9s and their caregivers.

“The process of making this film has taught me how each of us must take some personal responsibility for our own safety,” he said.

“It sounds a bit preachy, but one simple thing you can do if you’re hiking, boating, or camping, for example, is to be vigilant and take a little extra time to prepare. 20 minutes or 20 seconds of preparation – studying a map, packing your bag, making sure you have everything you need – can save your life and help you avoid putting others at risk if you get lost or go missing.”

Mary Lind, a graduate student working for the URI Department of Marketing and Communications, wrote this release.