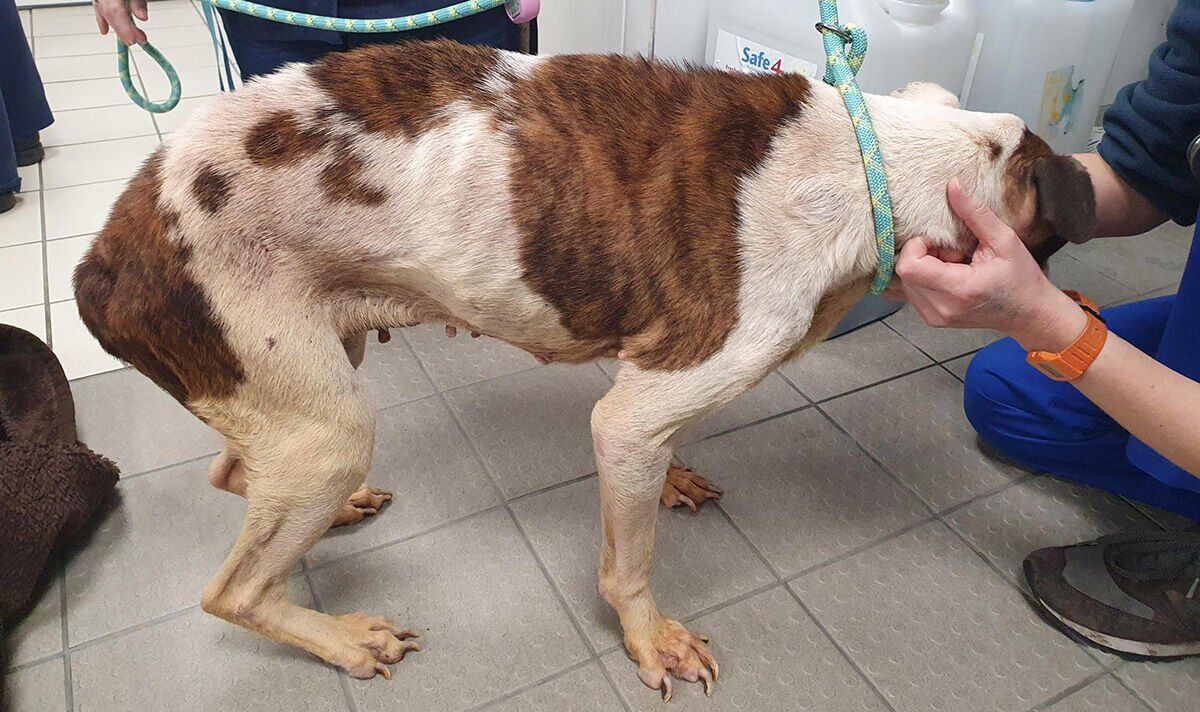 Describing it as the “worst case” of her 15-year RSPCA career, Inspector Laura Barber responded to reports of a dying dog locked inside a dirty house in November. She explained how housecleaning workers came across a sick boxer named Lacey, before taking him to Blue Cross Animal Hospital in Grimsby for emergency veterinary treatment.

Inspector Barber was sent to the address in Grimsby, north-east Lincolnshire, to gather evidence and upon entering the property discovered a house of horrors, The Mirror reports.

The decomposing body of a dog was found inside a locked room covered in feces and garbage, as well as two dead lizards found in vivariums without electricity.

Days later, the body of another dog was found in a freezer.

Inspector Laura Barber has 15 years of experience with the RSPCA (Image: RSPCA)

During interviews with the man who lived on the property, the full extent of the suffering of these animals was revealed.

It turned out that Lacey had spent two years locked in a dirty room covered in fleas and never let out.

Another named Hercules spent three months in a cage full of feces before he died.

The animal welfare charity has released shocking footage from the investigation to show some of the harrowing situations rescuers face in their quest to help rescue animals as part of its new campaign to end cruelty.

New figures released by the RSPCA reveal that 90,000 dogs suffered at the hands of humans last year and the charity needs the public’s support to help continue its work to stop cruelty for good.

Laura, recalling the time she went to the house, said: “I went in but the owner chose to stay out due to the disgusting state of the property.

“I knew it was going to be bad when I saw flies around the door and we’re used to dealing with some horrible situations, but this one was really horrible and very disturbing.

“Upon opening the front door I could immediately see that the entire floor of the entrance hallway was covered in dry, crusty excrement and there were cobwebs everywhere.

“The house smelled like ammonia and was full of garbage.”

But the worst was yet to come when Laura entered an upstairs room littered with hundreds of dried, crusty droppings and littered with garbage, where she found the decomposing body of a dog.

The wall above where the dead dog lay had flaked off the plaster and in parts had reached the wood, suggesting that this pet, named Lily, had spent some time trying to claw its way out of what was It had become a hideous prison cell.

Laura said: “There was a green plastic container that was empty and had been chewed on all around the edges.

“There was a metal tray with some dog biscuits that was covered in cobwebs.

“There was also a small empty pan of dog biscuits on the floor mixed in with the dog’s excrement. This room was extremely disturbing to view.”

Downstairs in the living room, Laura also found the bodies of two dead lizards housed in cobweb-covered vivariums that had no electricity and no food or water. Once again, they seemed to have passed away for some time.

When he entered the kitchen, he found a dog crate that was covered in excrement, indicating that a dog had been locked in the crate at some point for a considerable time.

She said: “The droppings were hard and about five inches deep in places. There was also a dog bowl that had been almost covered in droppings.”

This was the ‘worst case’ of Inspector Barber’s career (Image: RSPCA)

Laura took the dead animals with her as part of the RSPCA investigation and then went to visit the emaciated white boxer dog that had been taken to the vet.

Lacey was about eight years old and in very poor health, emaciated and riddled with fleas, she had urine stains on her legs from where she had slept in her own pee. She was so weak that she could not stand without help.

Laura said, “It was a pitiful sight to watch. She couldn’t stand up and could only lift her head to respond to my voice and touch.”

“He had a thick, brown discharge coming from his nostril, and his left eye was cloudy and looked strange.

“Even though she wouldn’t stand up, I could clearly see that this dog was in very bad shape, emaciated. I could see and feel her entire spine, ribs and pelvic bones.”

“His legs were heavily stained and instead of being white they were a dirty yellow colour, indicating that he had been in his own urine for some time.

“I could clearly see a bunch of fleas crawling through her coat and onto the bedding. She was in such bad shape it was heartbreaking to watch.”

Lacey remained in the care of the Blue Cross Animal Center in Grimsby, where she began to thrive and enjoyed human care.

Meanwhile, through her investigation, Laura was able to track down the property’s previous occupant and during an interview, she admitted to leaving dogs Lacey and Lily locked in separate bedrooms, riddled with feces, urine, and fleas.

He also recounted how a young dog named Hercules was housed for about three months in a cage in his own filth, deciding not to feed the reptiles and leaving them to slowly die.

Hercules’ body was later found in a freezer on the property.

The man, who died before his indictment went to court, claimed Lacey was his dog but kept the other pets after a friend moved out and kept the dogs in separate rooms because they didn’t get along. . He also claimed that he couldn’t clean up any of the mess because he had a leg injury.

Inspector Barber has been left heartbroken by the discovery (Image: RSPCA)

During the interview, he coldly stated that Lacey had been in his dirty room, in his own feces and urine, for two years and had never left it in all that time.

Regarding Lily, he said that she died from being locked in the other dirty room.

He said: “There were loads of poo and fleas everywhere. She was covered in fleas when I walked in, but I couldn’t afford to treat her.”

“His face was white but it looked black with all the fleas covering it and his eyes were yellow. That’s basically how he died.”

He also told how the dog found in the freezer – his name was Hercules – and had been locked in the cage full of feces for three months.

When asked how he died, the defendant replied: “The cage, it’s as simple as that. It was full of poo and there was no way I could get it out.”

Lacey was adopted by Ryan Rouse, a Blue Cross staff member who had helped her, but sadly after a few months due to previous neglect, her health was deteriorating and as she was in a state of distress, a vet decided to do it. more friendly. was to put her to sleep.

Ryan said: “Lacey was so gaunt when she came to us that she had to be carried.

“She was given treatment and when the only option to house her was kennels, I stepped in to offer her a foster home to give her a happy and safe place to live.

“She soon became a member of the family and we gave her all the love we could give.

“Sadly, the years of neglect took their toll and when it was time to say goodbye, the Grimsby team hugged her and many tears were shed.”

Some 90,000 dogs suffered at the hands of humans last year (Image: RSPCA)

Laura added: “It was heartbreaking that despite the best efforts of the dedicated staff who cared for and loved Lacey, she was unable to make the recovery that we all prayed for.

“It was very upsetting, but I take some comfort in the fact that she escaped from that horrible prison cell and was able to enjoy the outside world and that she also found a lot of love and affection with everyone who knew her.

“This was a disgusting case to deal with and it is very hard to imagine the pain, suffering and sheer terror those pets went through as they died a prolonged death under such horrific circumstances.”

Unfortunately, this kind of situation with pets suffering and dying is not unique, which is why RSPCA rescue teams need support to stay on the front lines as the only charity that rescues animals and investigates cruelty.

The RSPCA received 1,081,018 calls to its Cruelty Line last year and these included reports of:

RSPCA frontline teams are working hard to rescue animals in need this summer, but they need help to stop the cruelty.

If you can’t donate, there are other ways you can help Cancel Cruelty, from volunteering with the RSPCA, holding a bake sale or fundraiser, or taking part in the #50MilesForAnimals challenge.