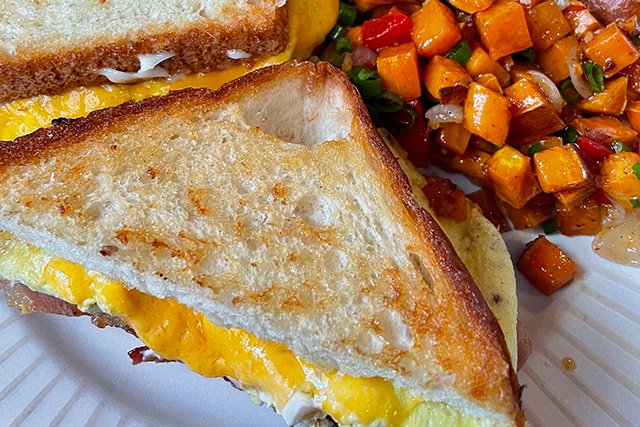 Usually when a group of college students get together, one can assume that a bit of a ruckus will ensue. But at the University of Richmond, a team of 16 budding entrepreneurs recently developed a nut-free alternative to granola as part of their curriculum. Now its crispy bean-based product, called Absurd Appetizers, is gracing store shelves at Good Foods Grocery, Lombardy Market and more local stores. (Richmond Magazine)

Johnny Cerra can remember exactly the first time he learned about growing mushrooms. It was in 2006, during an episode of “Dirty Jobs” starring Mike Rowe, and he has been fascinated with mycelium and fungi ever since. Along with his wife Megan, the duo operate watermelon farms and supply everything from prized oyster mushrooms to arugula to various area restaurants. (Richmond Magazine)

fresh on the scene

based in norfolk Table Brewing has started serving pints at its new RVA tavern, with a grand opening event this weekend. Part of The Current mixed-use development, which is also home to the Hatch Local food hall, the outpost is located at 434 Hull St. PS: Hot dogs are having a moment with their in-house kitchen concept, Silly Thoughts, which gets creative franks (Press release)

The family behind Mom’s Siam, Mom Siam 2, Yaya’s Cookbook, Pik Nik and My Noodle Bar, Sukanya Pala-art and her sons Joe and Sonny Kiatsuranon, have added another restaurant to their growing empire. Described as a combination of all family restaurants and a tropically outfitted place to watch a game, MPM Tiki and Sports Bar is now open at 11275 W. Broad St. (Press release)

Fans of gluten-free cupcakes and lovers of rustic breads and artistic cake creations, get ready to eat. We recently took a big bite out of the Richmond Bakery Scene in a function that celebrates all the sweet and savory candy stores in the region. (Richmond Magazine)

Check out Walmart’s frozen section for a local favorite the next time you visit. Mini snack-sized versions of Nightingale Ice Cream Sandwiches, also known as Chomp, are now available in hundreds of stores along the East Coast, while their OG sammies are available at every Fresh Market in the country. (Richmond Magazine)

Add a little freshness to your garden party with herbs ranging from basil to mint to brighten alcoholic beverages. Do spring cocktails at home with recipes from bartenders at JewFro, Kuba Kuba Dos, Gersi and The Boathouse. (Richmond Magazine)

Richmond Restaurant Week, one of the most anticipated and celebrated food traditions in the city, returns from April 18 to 22. This time, the 22nd annual event will return to its roots. Diners can expect three-course prix fixe menus for $35 at all participating restaurants, with $5 from each meal benefiting the hunger-relief charity Feed More.

Richmond Bakers Against Racism is hosting a Spring Bake Sale on Saturday, April 9 at Church Hill’s Pizza Bones. From 11 am to 1 pm, grab some seasonal treats from area home and professional bakers to benefit ReEstablish Richmond, a nonprofit organization whose goal is to connect refugees and new immigrants with the resources they need to establish roots.

After weeks of rounds of March Madness, Strawberry Street’s Scoop ice cream parlor has revealed the winner of its flavor tournament. Keep an eye out for the baklava, along with a dairy-free sticky rice and mango, appearing in the freezer in the coming months.

Speaking of ice cream, based in Roanoke blue cow — also with an outpost in Fredericksburg — will soon be added to the region’s portfolio of cool vendors. Owned by a husband and wife team, the duo plans to open their doors in June at 7017 Three Chopt Road. (Richmond BizSense)

Longoven announced his second ongoing event, two year dinner series for the benefit of the Richmond Public Schools. On April 19, Laine Myers from Oro will join the Longoven kitchen team for a family-style potluck to benefit Fairfield Court Elementary, with Tickets on sale now.

VCU held a course fair this week and welcomed a handful of new classes to the curriculum, including one right up my alley: food writing. English 491’s offering dives into the strategies and techniques of food writers and storytelling related to food and travel. As a student of Ram’s, I am jealous that this did not exist when he attended school.