Notes from Central Taiwan: Pelosi’s Visit: Heading for a Disaster of Biblical Proportions 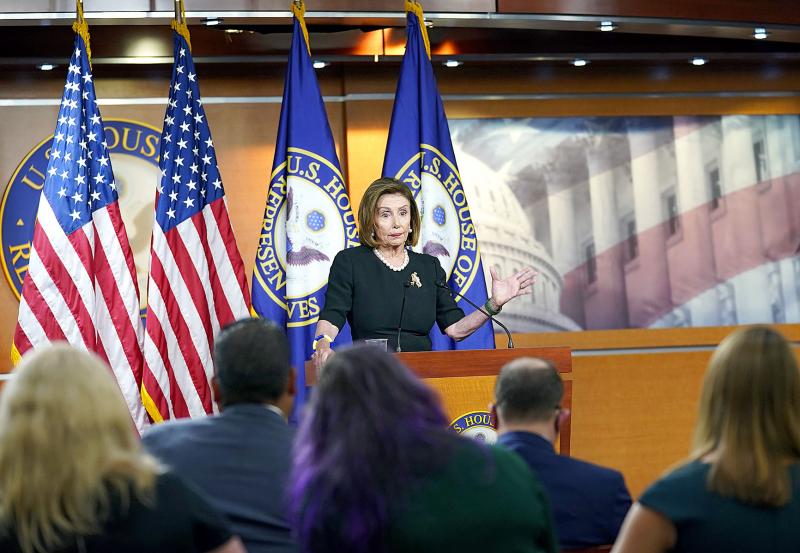 The newspapers are full of the story of the possible visit of the speaker of the United States House of Representatives, Nancy Pelosi, next month. For example, on Thursday, The New York Times reported, a Chinese foreign ministry official in Beijing said the “visit undermined relations between Beijing and Washington and warned that China would respond ‘as needed.'”

Oh no, wait. That was since September 2020, when there was a high-level visit to Taiwan by a US official. I bet none of my readers can remember who he was.

Zhao Lijian (趙立堅), a spokesman for the Chinese Foreign Ministry, said that “what the United States has done seriously violated its commitment to the Taiwan issue.”

Sorry, confused again. That was since August 2020, when the US Secretary of Health and Human Services visited. That excursion was billed as the highest-level official US visit since 1979, when the US switched recognition to China. What was his name, again?

Ok, now I know! Beijing warned the United States that it was “playing with fire.” My apologies once again, that was the canceled visit of the US Ambassador to the UN (who?) a couple of years ago. Later, he held a video conference with President Tsai Ing-wen (蔡英文).

Wow, we’ve come a long way since US State Department officials cowardly objected to pixels that made up an image of then-President Chen Shui-bian (陳水扁) appearing at the National Press Club back in 2007. People wonder how good visits like Pelosi’s are. do. On the one hand, they normalize face-to-face contacts, making other forms of contact, such as video conferencing, purely routine, below the comments. 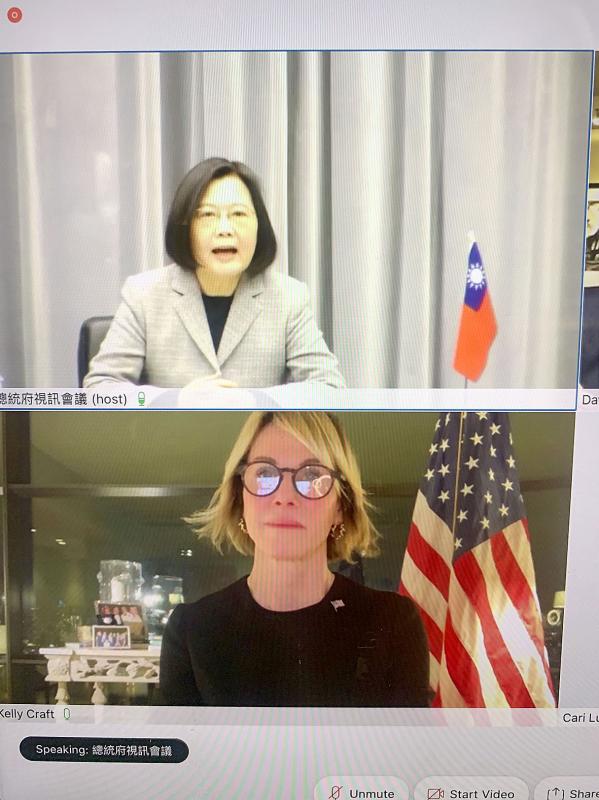 Photo: The United States Mission to the United Nations via AP

Here it is: China expressed “strong discontent and firm opposition” and said it would not allow any outside force to interfere in its “internal affairs.” I am sorry! That was the delegation led by the amazing Senator Tammy Duckworth in May.

AHA! Zhao said on Thursday that “China firmly opposes any form of official exchange between the United States and Taiwan.” No, that was for the delegation led by Senator Lindsey Graham in April.

When the Taiwan Travel Law was passed in 2018, the US sent a state department official to Taiwan. China made its usual boilerplate complaints – just mix in any of the above comments to retort. He too groaned when the act was approved. 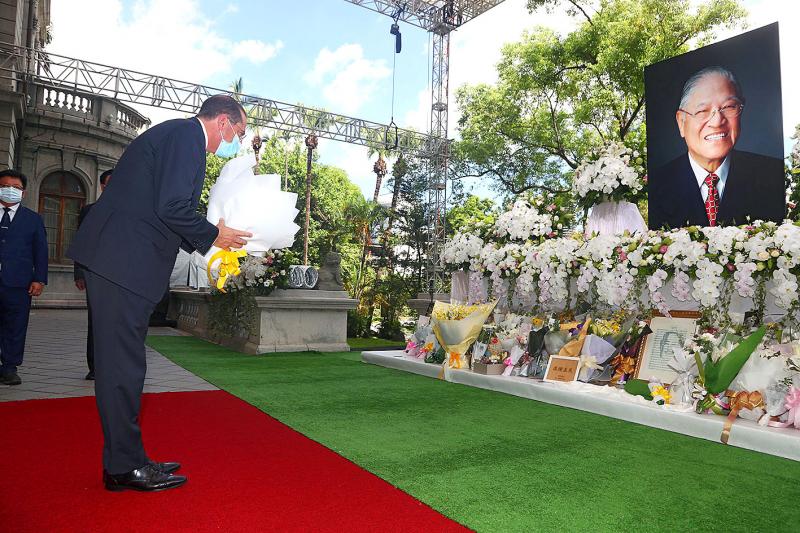 Remember Tsai’s phone call to President-elect Donald Trump? “Human Sacrifice! Dogs and Cats Living Together! Mass Hysteria!” For about three days, everyone suddenly became an expert on China and Taiwan, complete with references to 5,000 years of history, long-term orientation, and Sun Tzu (孫子). Jia Lynn Yang, then the Washington Post’s deputy director of Homeland Security, tweeted: “Just got back from a week in Taiwan. Tensions with China are really high, so this is just extraordinary.”

Where are those horrible consequences that we were all promised? Promised repeatedly over the years, for each and every official interaction, which always and inevitably occurs during periods of “high tensions.”

When else could they happen? Something always happens with China, because the two enormous powers have many points of friction in their complicated antagonistic relationship.

This horror of tensions, presented by Serious People whenever contact between the US and Taiwan may occur, goes something like this: when things are quiet: don’t rock the boat. When things are tense: don’t increase the tension. The operative word is always “no”. Since China’s response determines the level of tension, tension concerns essentially cede US room for maneuver to China.

Keep in mind that China’s foreign policy is so clever that no action it takes causes tension with the US, at least in our media. Bunch of foreign policy geniuses back in Zhongnanhai, huh?

At the time of this writing, it is unclear if Pelosi will be visiting. By midweek, the State Department said it had no idea. When asked about a trip, the State spokesperson stated, “I am not aware that the speaker’s office has announced any upcoming trips, so I would need you to refer it to the speaker’s office to discuss any potential trips that she could start.”

US President Joe Biden was also asked about Pelosi’s visit. Biden was widely quoted as saying, “The military thinks that’s not a good idea right now.”

This was met with the inevitable teasing that Biden was going dumb again.

People assume too quickly that the president, who has been in politics for decades, cannot express himself. Perhaps Biden was being as precise as he needed to be.

In his usual informal language, Biden did two things. First, she distanced herself from the possible visit. Second, by attributing it to the vague “military”, he distanced himself from the objections. The State Department did too. Is Pelosi going to Taiwan? Shrug. That is his business.

This in turn has two potential effects. It reduces the “officiality” of the trip and gives Pelosi space by taking the weight off her shoulders.

Meanwhile, with all eyes on visits from Pelosi and others, the US has quietly implemented a policy that observers have been recommending for years: Breaking down weapons packages into smaller sales that happen on a regular basis. In the last year alone, the US approved sales in August, and again in February, April and last month, none exceeding US$750 million. The flurry of noise about congressional and official visits has obscured this laudable development.

The problem with Pelosi’s possible visit is that it doesn’t appear to be part of any coherent long-term US strategy to help deal with all the problems Taiwan faces in its daily struggle just to be seen as a state in the international community. . The congressional visits are not tied to any other aspect of the US-Taiwan relationship. But maybe that’s intentional.

Such visits raise Taiwan’s profile in the US and around the world, and their bipartisan nature helps prevent Taiwan from becoming a partisan issue in US politics. Congressional visits are necessary and a powerful signal. Personal contacts have a great influence on foreign policy commitments. We will need the support of Congress if we are to get the arms and ammunition flows that Taiwan requires.

Pelosi or no Pelosi, the rhythm will continue here. The gray zone tactics will continue, the sand dredges, the relentless attacks on Taiwan’s international space, the disinformation flows, the misrepresentations of Taiwan in articles printed in China, the ADIZ raids, the threats, nothing will change.

When Beijing wants to attack Taiwan, it will cite something the US did as an excuse. This will also be a deliberate strategy, not only to put the onus on Taiwan and its allies, but also to activate networks of speakers in the media and other public spaces who will make their case for it.

As the uproar over Pelosi’s visit shows, these people are already very well trained.

Notes from Central Taiwan is a column written by long-term resident Michael Turton, who provides incisive commentary informed by three decades of living and writing about his adopted country. The opinions expressed here are my own.

Comments will be moderated. Keep comments relevant to the article. Comments containing abusive and obscene language, personal attacks of any kind, or promotion will be removed and the user will be banned. The final decision will be left to the discretion of the Taipei Times.