They will be working in Tāmaki Makaurau (2), Wellington (2) and Tairāwhiti (Gisborne).

The new teams graduated in front of members of the Police executive, including Deputy Commissioner Tania Kura and Customs Minister Hon Meka Whaitiri. 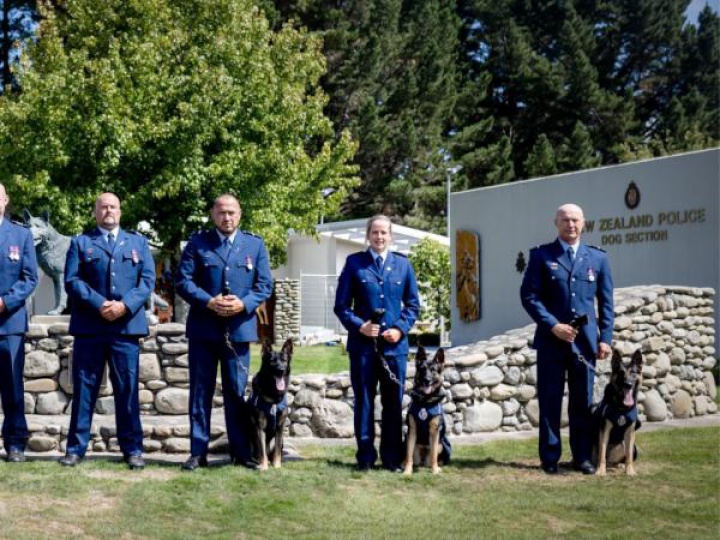 Inspector Todd Southall, National Coordinator: Police Dogs, congratulated the new teams and said they would be welcome to join frontline response as well as tactical surveillance and prevention.

Three weeks of final course training took a 24-hour break last week when handlers (minus their dogs) and instructors were dispatched to the Op Convoy protest policing requirements in Wellington.

The graduation is very special for two of the officers: it marks the first time Agents Alice Bennett (Tāmaki Makaurau) and Jordan Clark (Wellington) have qualified as operational dog handlers.

Officer Bennett joined the police force seven years ago and looks forward to putting her new skills to use on her canine companion Wren (22 months).

“I was lucky enough to raise Wren from when he was a puppy, so we went through our dog training section in our district and at the Dog Training Center together,” said Agent Bennett.

“Wren is full of beans, very energetic but also very loyal. I am grateful to all those who have supported us along the way and for the opportunity to put our training into practice.”

Agent Bennett will be one of six female officers currently working in the Dog Section, five of them in operational dog training roles in the district.

“It is a steep learning curve and experienced colleagues in the district helped me and prepared me well. The final course challenges us as handlers and our dogs with many different scenarios.”

A police officer for four years, Constable Clark has previously bred three police dogs, including Blue, who works in Wellington. He has had Jago or Jag for short for nine months and can’t wait to start work.

Lead Agent Owen Davies, Tāmaki Makaurau, has patrol dog Worg, who is a brother to Agent Bennett’s dog Wren. Worg have big paws to fill as Senior Constable’s previous dog is Quid (8) and they have been a very effective operational and championship team.

Senior Constable Davies, a handler since 2007, has twice been runner-up to Quid at the National Police Dog Championships and the pair enjoyed similar success at the 2016 Australasian Championships in Melbourne.

“Experience helps to know how to read your dog, but you have to remember that a new dog is like a new recruit. They absorb the experience, sometimes they get sidetracked, but they always want to do the right thing. In effect, we are a new team that is learning to work together.”

“Harlo battled ill health in recent months while I trained Tahi. They are totally different dogs, but it’s important to acknowledge Harlo and the work he did for me over the last two years, and previously for a Northland handler.

“He was old for a police dog, sore, a little grumpy, but he kept fighting and didn’t really get to enjoy retirement,” he said. “Tahi is a different dog, but I am looking forward to working together.”

Support the news you love

Learn more and join us: