Meet Sonic, the cutest and furriest security specialist in training at the Montreal airport 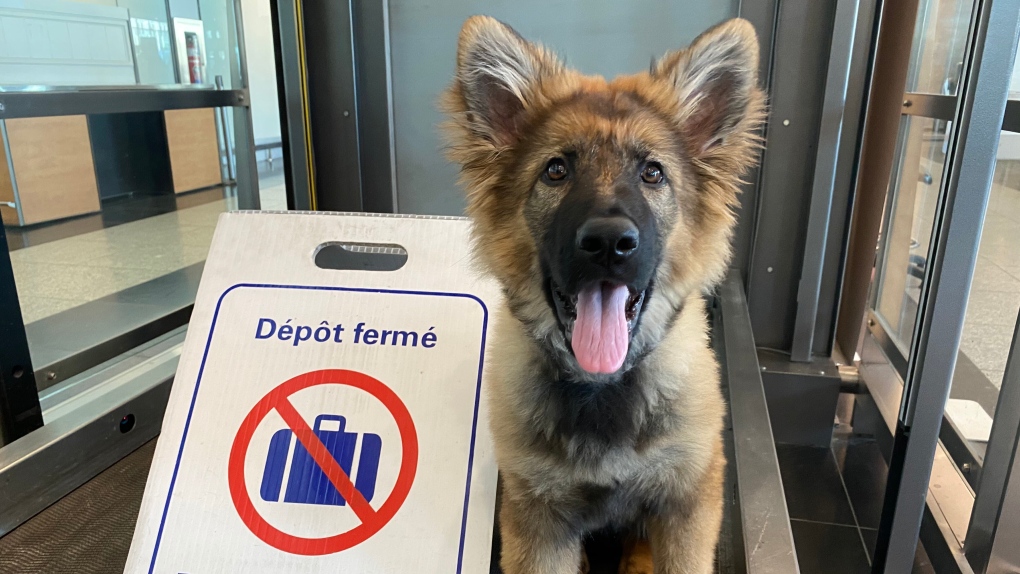 Like other major international travel hubs, Montreal Trudeau Airport relies on a wide range of technology to guard against any potential threat, much of it strategically installed out of sight.

But there is a decidedly low-tech security method that they keep out there for all to see.

He’s a shaggy, four-legged German Shepherd puppy with wavy movements, just about the cutest future security system out there.

“When Sonic is an adult … he will be an explosives detection dog, and for that we will have Transport Canada certification,” said Marie-Noelle Cote, Sonic’s handler and member of the airport’s canine unit.

Four-month-old Sonic still has some time to hone his skills before taking the exam in Ottawa, but until then he won’t be able to rely on his cuteness alone.

The pup has a lot to learn and absorb, especially a year or so from now when he is more mature and begins the more formal part of his training.

BUT FIRST – TIME TO PLAY!

The most important first step for Sonic is to develop a relationship with his controller and become familiar with his future workplace.

That means indulging his puppy personality by letting him explore and play.

Cote instructs him to jump onto benches and baggage platforms and teaches him how to back up on surfaces of varying heights so that he will eventually be agile in all airport and airplane spaces.

Not surprisingly, you get a lot of attention from passengers as you make your way through the terminal.

“They want a picture and they’re happy and they say it’s like zootherapy when they see the dog, the stress goes down,” Cote said.

Everything is in preparation for what comes next.

“In the training period, we learn to detect with the toy. So the dogs have to search for the explosives and he is rewarded with the toy,” she said.

Cote refuses to reveal too many details about how explosive detection training works, saying only the dog has to learn to “smell” various chemicals.

“We hide a scent and the dogs have to smell it and show it to us by sitting or sitting or freezing and we reward the dogs,” Cote explained.

The canine squad receives an average of three requests a week for their dogs to sniff out something suspicious, for example luggage that has been left unattended.

“Dogs learn by repetition and by exposure and we have to train in many situations, on planes, in vehicles, inside, outside,” Cote said.

Cote, who has owned and loved dogs all her life, said she believes any breed of dog could be trained to do this kind of work.

“We have the German shepherd because it’s like a police dog,” he said, a breed that passengers recognize and associate with public safety.

Sonic, the fluffy, diminutive tactician-in-training that he is, of course, won’t be giving off those serious German Shepherd signs for the next eight months or so.

Right now, he’s just a bouncy little puppy who has been a joy to raise and train, Cote said.