‘Lots of dead fuel’ to challenge firefighters as Oak Fire grows to over 14,000 acres 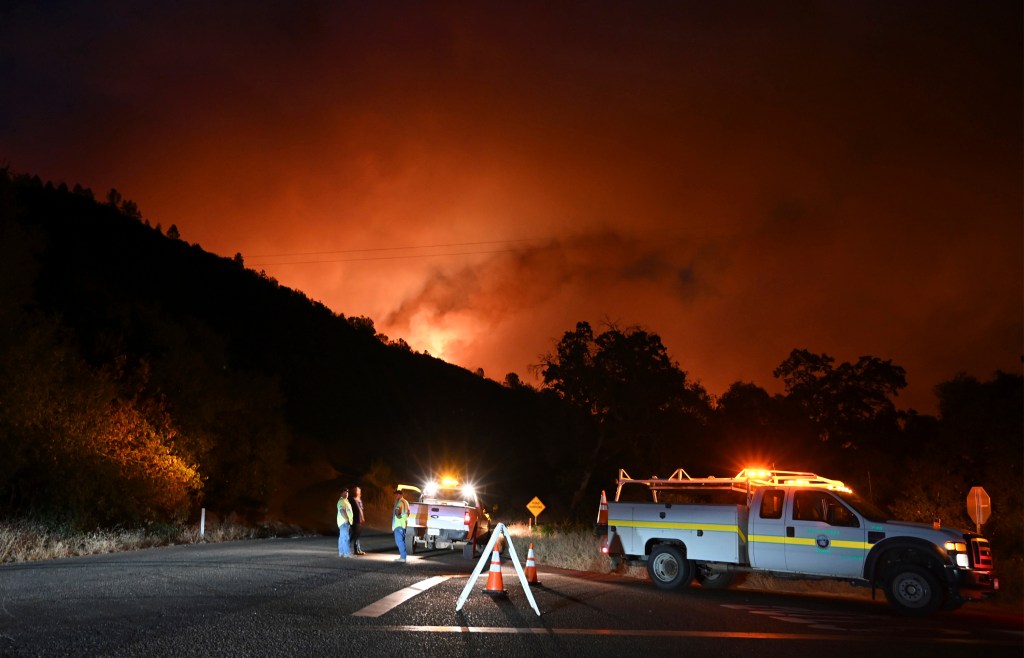 The fire scorched 14,281 acres across Mariposa County and remained 0% contained shortly after 7 a.m. Sunday, according to Cal Fire. More than 2,600 structures are threatened, leaving about a third of county residents under evacuation as flames advance across the dry landscape like tinder awakened by years of severe drought.

Hotter, drier weather is expected to further challenge firefighters on Sunday. The fire moved south and southeast overnight Saturday, a path that is expected to continue Sunday as light winds blow from the northwest, said Hector Vasquez, a Cal Fire spokesman. Of greatest concern are the small communities of Jerseydale to the northeast, Darrah to the east and Bootjack to the south, he said.

“This whole area already has a pretty heavy fuel load; wherever you push, there is a lot of fuel to burn,” Vasquez said.

Temperatures are expected to climb into the 80s or 90s and humidity levels are forecast to hover in the 10s for much of the day, said Jeffrey Barlow, chief meteorologist for the National Weather Service.

Winds are expected to remain relatively calm, he said, but the problem is that the forest is already dry and ready to burn.

“The real issue here is now with the weather conditions, it’s with the amount of fuel from the pine beetle kill,” Barlow said, adding that a strong wind event earlier this year brought down many dead or weakened trees. “There’s a lot of dead fuel and that’s what enables this explosive type of fire behavior.”

Just over 2,000 people are assigned to fight the fire, along with 225 fire trucks and 58 bulldozers to cut fire lines ahead of the flames, according to Cal Fire. Seventeen helicopters have also been commissioned to drop water on the fire.

The fire started Friday afternoon near State Route 140 and Carstens Road in the largely rural Midpines region of Mariposa County. But fueled by drought-stricken trees, it exploded Saturday and became a monster, sending a pyrocumulus cloud soaring 20,000 feet into the sky as it moved deeper into the Sierra National Forest.

At least 10 structures have already burned and five others have been damaged, Cal Fire reported. The flames remain a few miles west of the historic town of Mariposa, a town that dates back to the days of the California Gold Rush, with buildings built in the 1850s.

As of Saturday night, an evacuation center at Mariposa Elementary School had housed about 70 people since the fire started, including dogs, cats, birds and turtles.

Smoke from the fire choked much of the surrounding Sierra Nevada. Dangerous levels of air quality were reported along Highway 50 from Pollock Pines to South Lake Tahoe. And unsanitary conditions were observed from Donner Pass south to Mariposa.

More smoke is expected to drift over northeastern California and western Nevada on Sunday, saturating the air with harmful particles and potentially causing shortness of breath for people in the area.

A town hall meeting for people affected by the fire is scheduled for Sunday at 7 p.m. in the gym at Mariposa County High School, 5074 Old Hwy N.

The air in the Bay Area is expected to remain mostly clear for the next 24 hours thanks to the moisture content of the sea layer keeping smoke out, National Weather Service meteorologist Brayden Murdock said. As the moisture content decreases on Monday, small traces of smoke may reach the far eastern and northern regions of the Bay Area, including portions of Contra Costa, Napa and Solano counties. On Sunday morning, the Bay Area Air Quality Management District issued an air advisory for Monday and said the smell of smoke may be evident at higher elevations.