In Bucha, Ukraine: a ruin of battered bodies, charred tanks and lost souls 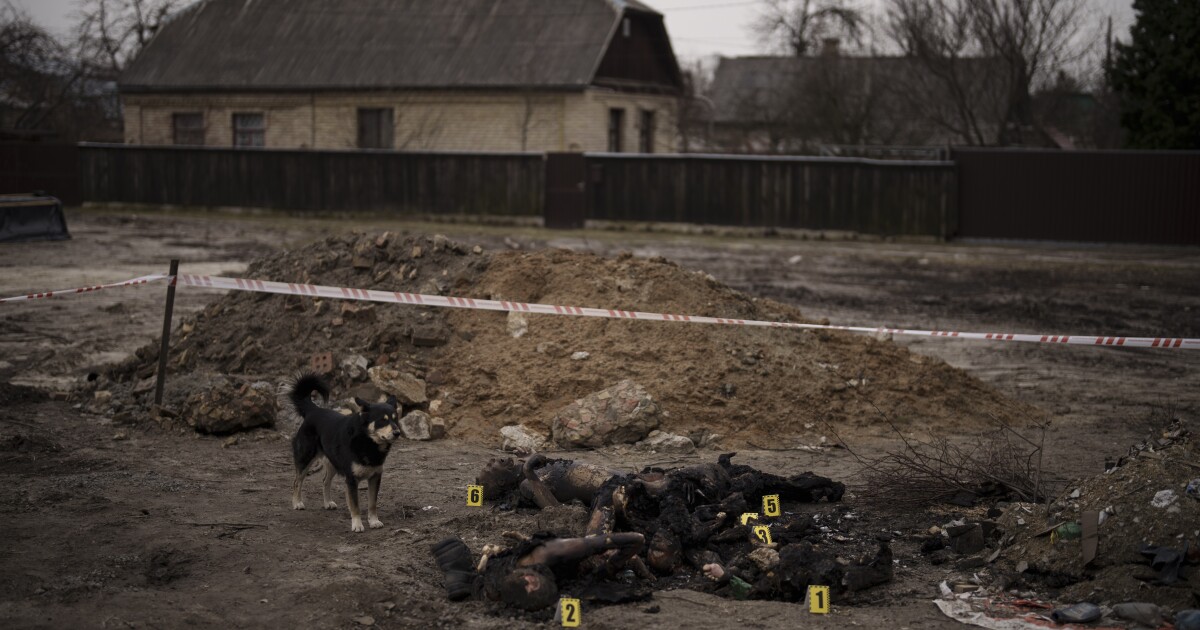 The bodies, charred and partially dismembered, lay strewn in the middle of a garbage pile in a lot along the edges of a forest. Ragged remnants of clothing clung to the shreds of skin. Who was a man, who was a woman, who was an adult, who a child: this was not possible to determine at a glance. A severed leg, badly charred, lay some distance away.

This painting was about 100 meters from a playground with swings and slides, located under a wooded shade.

A Ukrainian forensic team, each member wearing blue plastic gloves, worked with the speed of practice. They pushed through a rush of reporters, ducked under the crime scene tape, and hastily gathered up the fragments and placed them in black bags. Some mixing of parts seemed inevitable, so intermingled were the corpses. The workers closed the bags tightly and lifted them to take them to the morgue.

This city northwest of kyiv, the capital, was a good place to live, residents say. An idyll of forests, ponds and parks. Bucha retains a semi-rural feel despite the inevitable advance of urban sprawl: shopping malls, condominium towers, gyms.

Now Bucha has become notorious as ground zero for what Ukrainian authorities call a Russian war crime, a wave of killings against civilians, some found with their hands tied behind their backs, apparent victims of summary executions. Video footage of victims lying along a street shocked the world and gave new impetus to Ukrainians’ demand for additional military aid to combat the attack and more sanctions against Moscow.

People “were killed in apartments, houses, blown up by grenades,” President Volodymyr Zelensky told the United Nations on Tuesday, adding that some “were crushed by tanks in civilian cars in the middle of the road. For fun.”

At least 417 civilian bodies have been discovered in kyiv-area towns recently recaptured from retreating Russian forces, Ukrainian officials say. Who they all were, how exactly they perished, are questions that remain under investigation as authorities scramble to identify those killed in a war that has stretched into its second month.

Russia has denounced the scenes in Bucha and other nearby towns as fake, a “staged anti-Russian provocation”, in the words of Sergei Lavrov, Moscow’s foreign minister.

Here in Bucha and other suburbs, however, there is evidence of how the world, despite collective outrage fueled by Twitter videos of murders and satellite photos of troop movements, seems powerless to stop such atrocities. Officials are continuing to collect bodies from shallow graves, streets, yards and other sites, including the vacant lot from which the six victims were pulled Tuesday. The remains of the six, like those of other victims, were burned in a clumsy effort to cover up the crime, authorities say.

While collecting the dead, the officials and military are also busy with another task: clearing the many mines, piles of unexploded ordnance and other battle debris left in Bucha and other formerly occupied towns. Warning signs, “Danger: Mines,” dot the area. Some buildings may be booby-trapped, the military warns.

But the stray artillery and equipment littering the streets were not deliberately left behind. Their presence is a consequence of Russia’s ignominious attack on the northern outskirts of kyiv and the subsequent withdrawal of its forces. Bucha is not just a graveyard for the Ukrainian dead: it is also a graveyard for Russian war material, and possibly the place where Moscow’s apparent intention to storm kyiv quickly and take the capital ran aground.

A street in Bucha is a brutal testament to the blows inflicted on Russian hardware and the failed ambitions of Russian President Vladimir Putin.

Burnt remnants of a dozen Russian tanks and armored personnel carriers, and at least one fuel tanker, mark a three-block stretch of the city. The sheer scale of destruction seems paradoxical on this tree-lined street, where chickens peck at adjacent patios. A twisted jumble of ammunition, metal shards, coils of wire, tire shreds, cartridge belts, tank tracks are strewn about: a blackened tank turret sits in the front yard of a house.

It is a scene of destruction, as if a fire-breathing giant has unleashed its fury, smashing machinery with steel claws. The wreckage is the result of a Ukrainian ambush, complete with drone strikes, apparently just days after the Russian invasion on February 24. It is unclear how many Russian soldiers were killed in the attack and how many escaped. Amongst the ruins is a military boot with splintered bones visible inside.

Experts have been combing the scene, removing potentially dangerous ordnance. But journalists have been invited to walk through the rubble, in a sort of surreal parade, broadcasting images of a defeated Russian column to the world.

The houses along this and other streets are mostly unoccupied. For Bucha these days it is a ghost town. Most of the residents fled the Russian bombardment, joining millions of others displaced. Curtains flutter across the broken windows of high-rise apartments where no one lives anymore.

Only about a tenth of Bucha’s pre-war population of about 30,000 remains, Mayor Anatoly Fedoruk said. He has warned the townspeople to stay away until the mines and other hazards are cleared, and power is restored.

Some residents seeking food and other aid gathered Tuesday outside a shopping mall that had been shelled and looted. Shell casings, shrapnel and broken glass litter the ground. A burned-out power plant sat across the street, its dire condition not too promising for workers looking to restore power.

Stray dogs were fighting over scraps of food in the empty parking lot of the mall.

Many of the residents huddled outside were older. They were unable, or unwilling, to flee from the Russian attack. They appeared in the street like ghosts crouching in the biting cold. Many have been living for weeks without electricity, running water or heating.

“I would like to be warm again, take a hot bath and be clean,” said a shivering Lisa Andreshenko, 46, who was among those queuing for help. “It feels like forever since we were hot, we had a proper hot meal.”

Gusts of snow blew across the commercial strip.

Leonid Mutnichenko, a 58-year-old retiree, showed a measure of good cheer despite the circumstances. His family had a secret weapon: an old wood stove that he and his mother had almost thrown out, but now, without heat or electricity, it turned out to be very useful. He laughed at the cunning of it all.

She was quick to introduce her mother, 80-year-old Valentina Kusovkova, dressed in layers of shawls and coats. She didn’t complain about the cold.

He had bigger thoughts: “We must save our country,” he said.