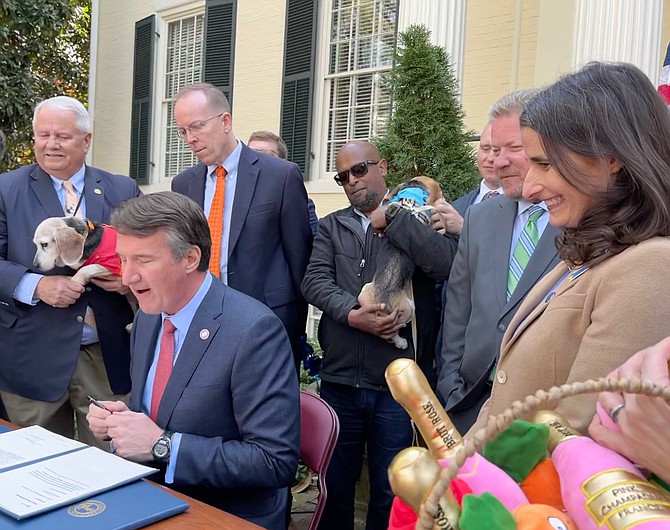 Governor Glenn Youngkin signed five animal protection bills into law on Monday, declaring them a bipartisan success story. Addressing legislators, animal advocates and dogs at the signing ceremony, he noted that all members of the General Assembly voted in favor of the bills; by unanimous approval. “Dogs and cats are protected by Virginia’s cruelty laws and welfare standards, and they will be fully enforced.” 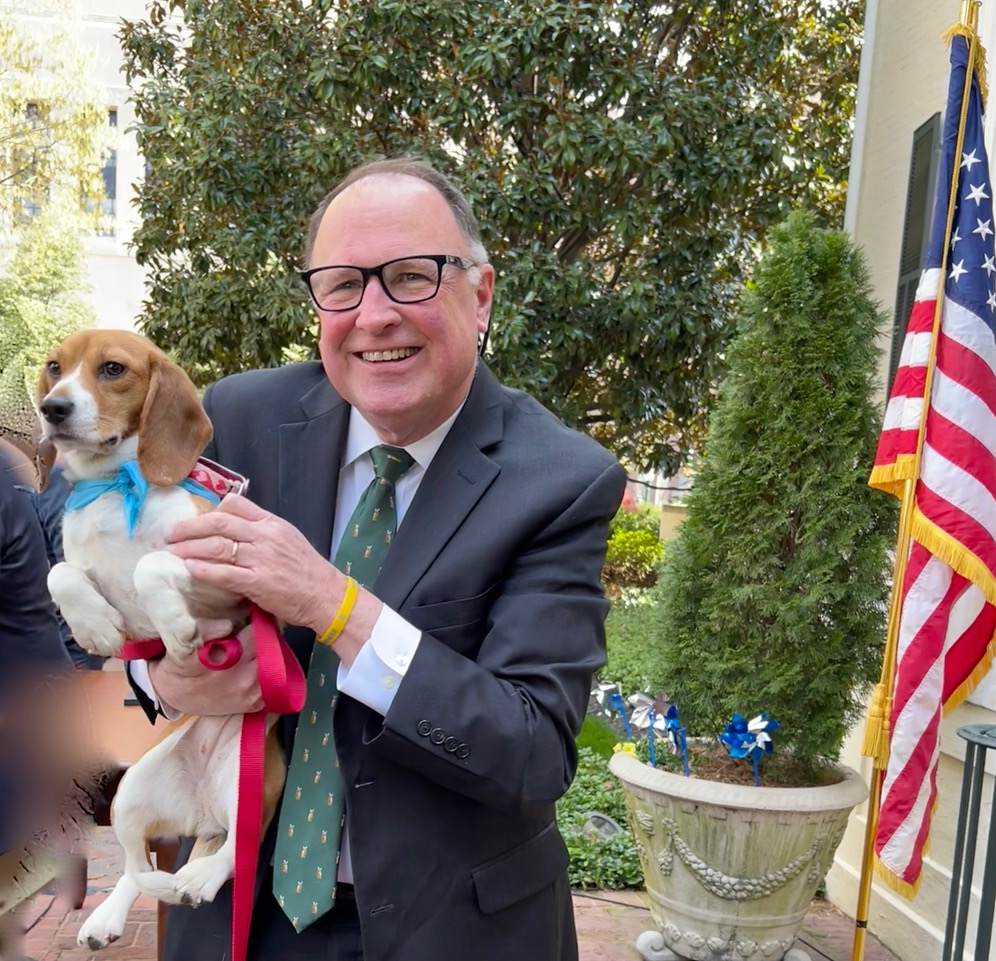 Sen Creigh Deeds (D-25th), one of several legislators who adopted beagles released by Envigo, with Mila

Known as “the beagle bills,” the bills specifically protect the preferred breed of research dogs, beagles and cats, bred for medical and scientific research and testing. Previously, research breeders were exempt from many of Virginia’s animal welfare laws. The newly enacted bills will place commercial research breeders under the same requirements as other regulated commercial breeders. The new laws cover both cats and dogs; and require new record keeping, an opportunity for adoption consideration before euthanasia for unnecessary animals, coverage under pet cruelty penalties; and a ban on continued sales if found guilty of a certain number and type of welfare violations, after July 2023. Several of the beagles rescued from a life of research and allowed to be put up for adoption attended the dedication ceremony. sign with their new or adoptive owners. fathers.

In recent years, the white-hot advocate for animal legislative action in Virginia has been the sale of puppy mills to pet stores. This year, the focus of most animal bills shifted to protections for investigative dogs and cats. Members of both parties sponsored bills to address the protection of dogs and cats bred for research. Five of those 11 similar bills survived and received unanimous votes to go to the Governor’s desk, being signed into law on April 4.

Many of the aspects of similar Democratic-sponsored bills were changed in the language of the final signed bills for which Republican Sen. Bill Stanley (R-20) and Delegate Rob Bell (R-58) were the main sponsors. Working to reach a compromise, Sen. Jennifer Boysko (D-33) became a lead co-sponsor of the Stanley bills, and Delegate Kaye Kory (D-38), chair of the General Assembly Animal Caucus, she became a House sponsor of three of the bills. , ensuring that all provisions of the protections were included.

Virginia’s only commercial breeder of research-grade dogs, Envigo, located in Cumberland, ran afoul of federal inspectors from the U.S. Department of Agriculture. During the nine-month period, USDA inspectors found 73 violations of the Animal Welfare Act, almost half of which were classified as the most serious category. Documented violations included withholding food from lactating females, euthanasia without required anesthesia, more than 300 puppy deaths, injured dogs, and poor housing and sanitary conditions.

The original House bills sought to shut down Cumberland’s offending operation, while the Senate bills, after subcommittee amendment, allowed for a one-last-chance philosophy. Subcommittee chairman Senator Dave Marsden (D-37) took the position that Virginia should deal with breeder misoperation rather than kicking them out of the state to become someone else’s problem.

Envigo’s abuses also came under scrutiny from US Senators Mark Warner and Tim Kaine. In a letter dated March 31, 2022 to the Animal and Plant Health Inspection Service, the Senators urged “act aggressively” and set a deadline of April 20 to respond to a list of questions related to the case. .

Companion animal issues often make up a significant portion of the bills considered by agriculture committees in each session at the state and federal levels. Interest in animal welfare is high, given that 68 percent of American households had a companion animal in 2021, according to the Animal Legal Defense Fund.