Giggs headbutted a woman after a confrontation, the trial said 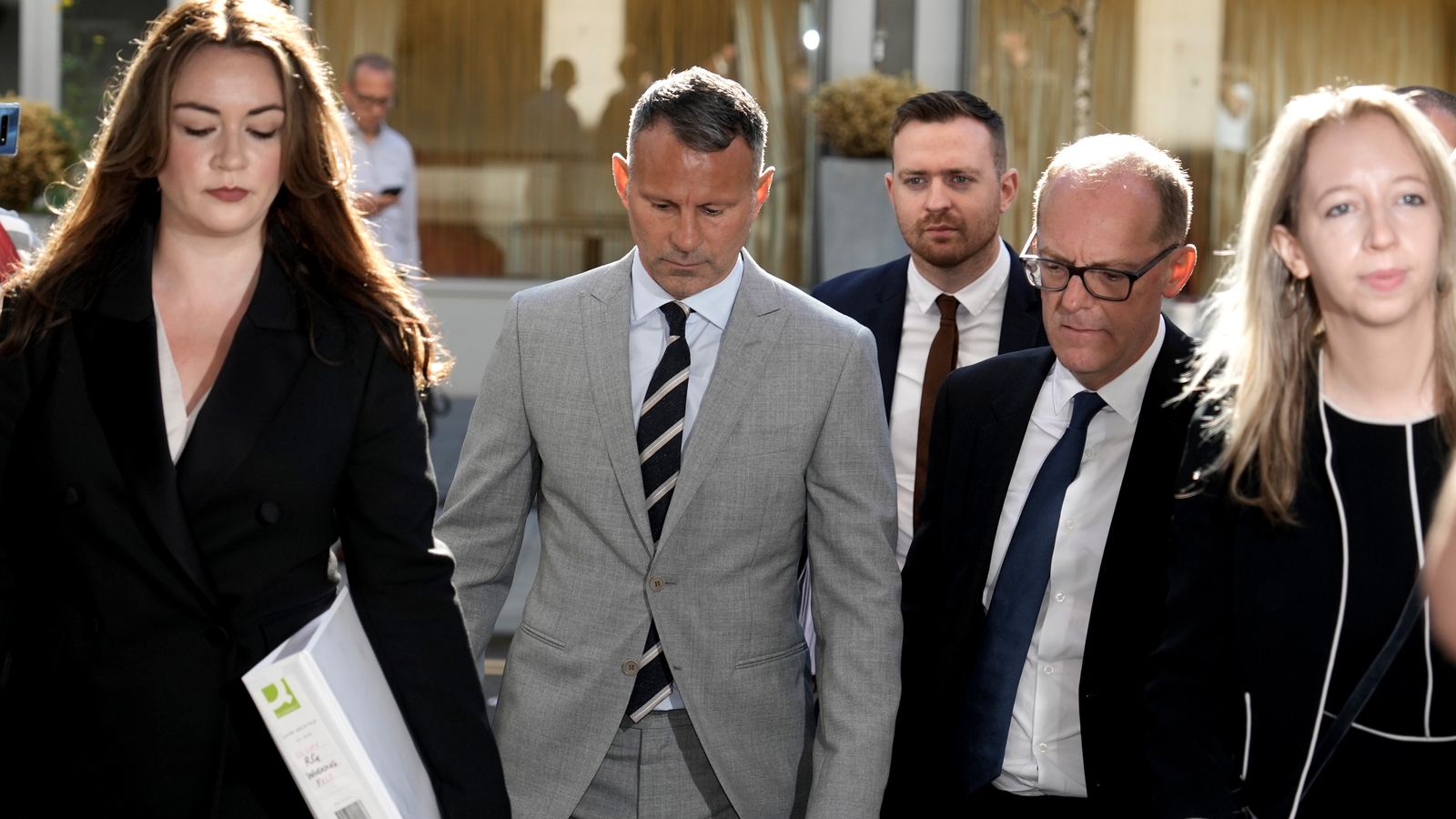 Ryan Giggs grabbed his ex-girlfriend by the shoulders and headbutted her after she earlier confronted him about his serial infidelity, a court heard.

Public relations executive Kate Greville said in the run-up to the alleged assault in November 2020 that she had learned he had “whole relationships” with eight women while they were together.

The discovery of messages “going back years” on the former Manchester United footballer’s iPad prompted her to decide to quit, she said.

Giving testimony at Manchester Crown Court behind a curtain, Mrs Greville said she had secretly signed up for an apartment and planned to “disappear” from Mr Giggs’ home in Worsley, Greater Manchester, where she had lived since the Covid-19 lockdown in March 2020.

On the afternoon of November 1, she went with Mr. Giggs, 48, to the Stock Exchange Hotel in Manchester, part-owned by defendant and fellow former footballer Gary Neville.

But an argument ensued over dinner at the restaurant, she said, when she told Mr Giggs about a man who had previously invited her for a drink.

She told the court: “I told this guy ‘I can’t believe you asked me out, you have a girlfriend.'”

When asked how Giggs responded, he said, “It was ‘why didn’t you say you had a boyfriend?’ He was angry. He kept bugging me. He wanted me to agree with him. I wasn’t ready to do that. I stood up for myself.”

She said he “went out in a rage” and went up to his hotel room where they had planned to spend the night.

Greville, 36, said she stayed at the table and felt “a little embarrassed” before going up to her hotel room.

We need your consent to load this content from rte-playerWe use rte-player to manage additional content that may set cookies on your device and collect data about your activity. Please review your data and accept it to load the content.Manage preferences

She said: “He had packed up all my things and said he wanted me to go.

“He was basically saying that he was breaking up with me and that he wanted nothing more to do with me.

“I knew everything he had done.

“I had the test for the first time because he had always managed to convince me that it was all in my head and it was driving me crazy.

“I showed him some of the messages I had seen.

“I had taken screenshots, there were a lot of them.

“He said that what he was saying was not true.

“Then he got in my face and yelled and told me to go away.

“He was very drunk and very angry.”

She said she collected her belongings and called an Uber to Mr. Giggs’ address where his sister, Emma, ​​was taking care of their golden retriever puppy Mac.

Mrs. Greville said he called her on the phone and asked her to “get my things and the dog” into his car.

He came back and was upstairs packing before 10 to 15 minutes later, he saw lights outside when Mr. Giggs arrived and began unloading his belongings into garbage bags from his car in front of the house, he said.

Mrs Greville said: “He was very angry. I hadn’t seen him this angry before. He was drunk. I think the whole situation had calmed me down.”

The couple then wrestled with Ms Greville’s phone in the hallway of the home and into an adjacent utility room, the court heard.

Mrs Greville continued: “He pushed me backwards, I ended up on my back in the utility room.

“I was on my back on the ground with my phone in my hand.

“He’s pinning me to the ground and trying to reach the phone in my hand.

“I was trying to do everything I could to get him off me. I was yelling at my sister to help me: ‘Get him off me’.”

Mrs Greville said Emma grabbed Mr Giggs around the waist to pull him but he pushed her arm back to try to throw her off and is alleged to have hit her in the jaw.

Mr. Giggs managed to grab the phone from Ms. Greville, pushing her head to the ground when he got off her, he said.

Ms Greville said that Mr Giggs told her that he had called the police and was going to tell the officers that Ms Greville had attacked him and that she was a “psychopath”.

She added: “He was really angry but quite arrogant.

“There was some provocation, he was trying to provoke me, basically.”

Then they moved into the kitchen.

Mrs Greville said: “I said ‘I’m glad the police are coming because you attacked me and I’ll tell them what happened’.

“That’s when he came at me and headbutted me in the face.

“He just came at me, grabbed me by the shoulders and headbutted me in the face.

“I said, ‘I can’t believe you did that. I was in shock. I fell back, my lip swelled up instantly, so I put my hands to my mouth. I could taste blood.’

“All the other times he’d hurt me, this was different. This was with real intent. He really wanted to hurt me.”

Mrs Greville said Mr Giggs then told her: “You have to think about this, Kate.

The police attended and Mr. Giggs was arrested.

Mr. Giggs denies using controlling and coercive behavior against Ms. Greville between August 2017 and November 2020, assaulting her, causing her actual bodily harm, and common assault on her younger sister.