Explained: How Are Army Dogs Recruited And Trained, What Functions Do They Perform? 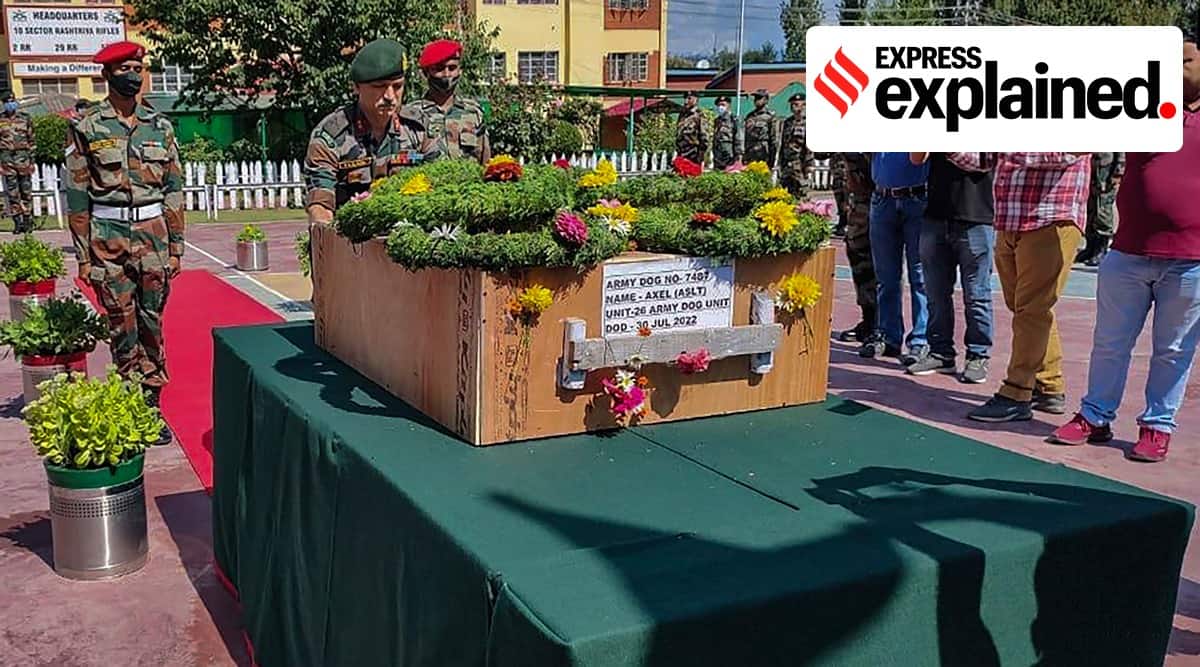 A two-year-old army dog ​​named Axel died in the line of duty in Jammu and Kashmir on July 30 while taking part in a search operation with a Rashtriya Rifles battalion. The Army gave Axel a ceremonial honor guard prior to his burial at the Army Dog Unit in which he served.

How did the army dog ​​Axel die?

Axel was serving with the 26th Army Dog Unit in the Kashmir Valley and was deployed on a search mission during a counter-terrorist operation carried out by the 29th Rashtriya Rifles. While he was cleaning the rooms where the suspected terrorists were hiding, he was shot by one of the terrorists in hiding, fatally wounding him. A subsequent autopsy of Axel performed at the 54th Army Veterinary Hospital revealed that he had more than ten gunshot wounds and a fractured femur.

Axel was honored at a ceremony held by the 10 Sector Rashtriya Rifles headquarters, where the Rashtriya Rifles Force Kilo Commanding General Officer and other senior officers laid wreaths. He was later buried on the grounds of the 26 Army Dog Unit.

How many dog ​​units does the Indian Army have?

In statements made in Parliament in 2019, the Minister of State for Defense had revealed that the Army had 25 full canine units and two half units. A full canine unit consists of 24 dogs and a half unit has 12 of them.

What kind of dogs are admitted in the army?

The Indian Army has various breeds of dogs in its canine units. These include Labradors, German Shepherds, Belgian Malinois, and Swiss High Mountain Dogs. Axel was reportedly a Belgian Malinois dog.

What are the functions performed by army dogs and where are they trained?

There are a variety of tasks that Army dogs perform including guard duty, patrolling, sniffing out explosives including improvised explosive devices (IEDs), mine detection, sniffing out contraband items including drugs, target assault potential, avalanche debris detection and participation. on search operations to locate fugitives and hiding terrorists.

Every dog ​​in the army has a dog handler with him who is responsible for the welfare of the dog and also for guiding him through the various tasks he has to perform.

Army dogs are trained at the Remount and Veterinary Corps Center and School located in Meerut. A dog training school sprang up on this site sometime in the 1960s. Depending on the breed and aptitude of the dogs, they are trained in various skills before being admitted.

How long do army dogs stay in service?

Army dogs are in service for about eight years before retiring. There was an earlier practice of euthanizing army dogs after they were no longer on active duty. A response from RTI in 2015 that provided this information caused a public uproar, after which the policy was changed.

Army dogs are no longer permanently put to sleep. A PIL was also filed in the Delhi High Court in this regard in 2016, where the then Additional Attorney General Sanjay Jain filed a statement saying that the animal euthanasia policy was being changed and the dogs would be rehabilitated.

Are army dogs decorated for bravery?

In the UK, the highest award for animals in military or police service is the PDSA Dickin Medal. It was instituted in 1943 by Maria Dickin, founder of the People’s Dispensary for Sick Animals (PDSA) for any animal showing remarkable bravery and devotion to duty while serving in the British armed forces or civilian emergency services. The bronze Dickin Medal is engraved with the words “For Bravery” on one side and “We Also Serve” on the other.