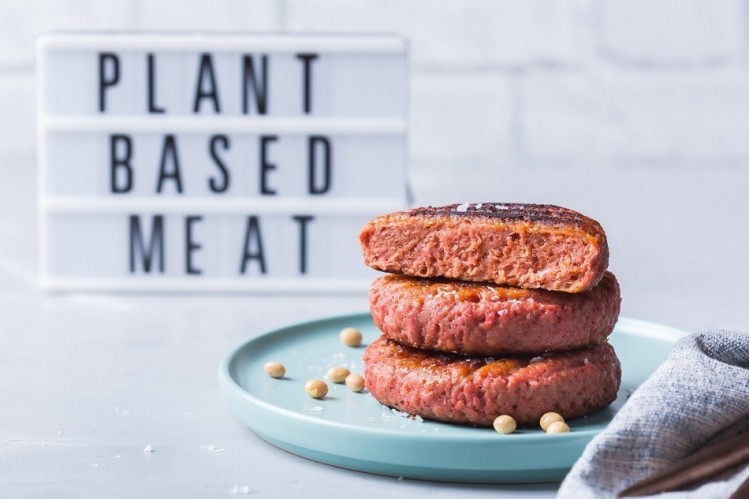 Used by high-profile brands like Beyond Meat and Impossible Foods, methylcellulose is created from cellulose (a natural substance found in plant cells) by heating with a caustic (alkali) solution and treating with methyl chloride.

The end product is an odorless white powder with attractive gelling and emulsifying capabilities that is soluble in cold water, forms a gel at higher temperatures, and holds plant-based meat products such as hamburgers together while cooking, as well as enhancing the succulence and juiciness. The gel is ‘thermosreversible’, which means that when it cools down, it returns to a viscous solution.

While none of the major retailers or foodservice brands, including Whole Foods and Panera, include methylcellulose on their “unacceptable ingredient” lists, it is it’s not something consumers have in their kitchen cabinets at homeand is frequently cited as evidence for the ‘highly processed​’ nature of some plant-based meat products and was recently mentioned in a lawsuit against Beyond Meat challenging the ‘natural’ credentials of its burgers. ​

Many companies are working on more label-friendly alternatives, including Noble– which says that beta glucan produced by a single-celled microbe called euglena has the potential to replace methylcellulose; fiberstar– stating that recycled citrus fiber could replace methylcellulose in combination with agar, native starch and psyllium; Y Silence– a startup that produces proteins through microbial fermentation.

“If you ask any consumer what methylcellulose is, they probably won’t recognize it, and even more likely they won’t feel comfortable consuming it.​” said Merit Functional Foods Co-CEO Ryan Bracken.

“But despite this, methylcellulose is part of the ingredient labels for many of the meat alternatives on the market today due to its unique functionality, and formulators are struggling to find a suitable clean-label solution to replace it.” .​

“Our approach is to use transglutaminase in conjunction with pea protein that has gone through our proprietary membrane filtration process.”​

So how has Merit cracked the code? Jeff Casper, director of R&D, told FoodNavigator-USA: “Our approach is to use transglutaminase in conjunction with pea protein that has been through our proprietary membrane filtration process.​

“Many meat alternatives will use an emulsion to help bind the textured proteins, and we have found that our Peazazz Pea protein, when used with transglutaminase in this type of system, creates a strong, elastic gel that can mimic the texture of methylcellulose-containing products when cooked.​

“Transglutaminase creates cross-links between glutamine residues and lysine residues in proteins, and while this enzyme is not new, we have seen quite remarkable gelation with pea proteins that have been produced by Merit membrane filtration” .​

‘We knew we had something special’​

“Gels formed using Peacezz they were more than four times firmer than the next best performing competitive pea protein we tested, and we tested several types produced using different processes. Not only were they weaker, but they were also very thick with a grainy texture. pazazzz produced smooth gels without graininess.​

He added: “Our applications team noted this exceptional gel strength and elasticity, and then compared it to fava, mung, and potato, which produced thick, weak gels with transglutaminase. Our protein is produced by membrane filtration, which changes the composition of the protein and removes impurities that can affect taste and functionality, including how it behaves in transglutaminase-catalyzed gel networks.”​

‘A remarkable material…’ Why is methylcellulose so ubiquitous in plant-based meat?​

“The first function is as a binder, or glue, to adhere particles before forming and cooking burger patties, alternative meatballs, links, or other types of products. Second, the methylcellulose will gel at high temperatures and provide a hot structure, a meat-like bite, and durability and stability when cooking and eating. When methylcellulose gels, it also expresses some moisture, giving the product a realistic mouthfeel.​

“Finally, one of the other difficulties in replacing methylcellulose is that it is easy to stain and has a completely neutral taste. So it’s a remarkable material, but not one that some consumers want to consume.”​

So would the enzyme be considered a processing aid or would it have to be listed on the label?

“In the US, transglutaminase can be labeled an ‘enzyme’.” Casper said. “Depending on the specific process and applications, and if it is inactivated, it may be considered a processing aid.​ [which would mean it wouldn’t need labeling].”

When asked what kind of feedback Merit has had in the market, he added: “I think it’s a significant step towards plant-based meat alternatives with cleaner labels.​

“Our applications team has utilized the exceptional gelling performance of our Peazazz and Peazazz C products. ​to develop some fantastic methylcellulose-free concepts, including plant-based burgers and sausages where the gelled emulsion binds particles together, as well as plant-based hot dogs and a pea-based tofu where the gelled emulsion forms the entire structure. We are showing these concepts to customers and getting feedback on how firm and elastic the products are.”​

“Both the formulation and the process will need to be adjusted to accommodate this approach,” Casper said.

“Because you are creating a protein gel, you get the double benefit of the structuring agent being your source of protein, just like in traditional meats.​

“But the level of use of protein will be higher than that of methylcellulose; however, the level of protein usage may not be higher than what would be used in these types of formulas anyway. For products like pea-based tofu, hot dog, or bind system, the base formula is simply water, pea protein, oil, and enzyme. Most of these ingredients are already on the label, so it has the potential to be very positive for the ingredient statement.”​