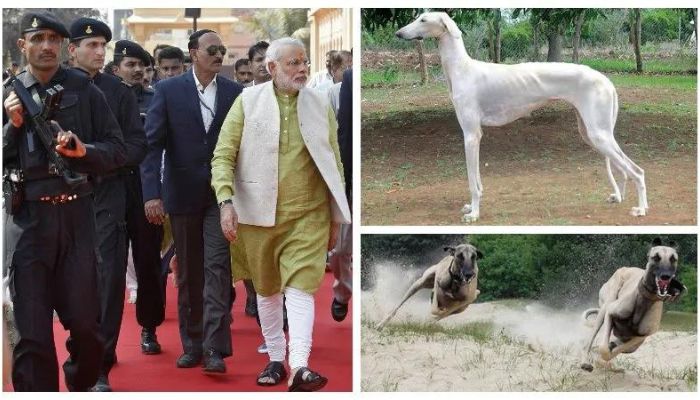 A native breed of dog, the Mudhol Hound, is included in the Special Protection Group (SPG) squad tasked with the Prime Minister’s security arrangements for the first time. Mudhol Hound will be included in the security team after four months of training. Dogs of this breed are known for their loyalty.

The PM is under the security cover of SPG staff around the clock. The security squad includes army and police personnel, as well as trained dogs. Now Mudhol Hound dogs will be added to this security team. The Mudhol Hounds have already been inducted into the Indian Armed Forces and some paramilitary forces.

SPG officials visited the Thimmapur Canine Information and Research Center in the Bagalkot district of Karnataka in April this year. Authorities had expressed a desire to include two male dogs from the center in their squad.

Salient features of the Mudhol Hound

Mudhol Hound is becoming the favorite of the Indian security forces due to its characteristics. Dogs of this breed reach 72 centimeters in height and weigh between 20 and 22 kilograms. Because of this, there is amazing agility in these dogs. A dog of this breed adapts to the weather. Also, he is known for his bravery.

Mudhol Hounds have a greater ability to see than other dog breeds. You can see up to 270 degrees. Mudhol Hounds are extremely loyal to their masters. These are excellent hunting dogs for their long legs and slender physical appearance.

Mudhol Hound is also known as Maratha Hound, Pashmi Hound, Kathewar Dog, Bedar, Berad, Kathewar, and Site Hound. It is in demand around the world due to its bravery and ability to adapt to different weather conditions. The greatest demand for this species of dog is from Australia and Denmark. Along with this, it also ships to many other countries.

The story of the Mudhol Hound

Malojirao Ghorpade, who ruled this princely state until 1937, is said to have once gifted a pair of this native breed to King George (V) of Great Britain, who named this dog the Mudhol Hound. Since then, his name has become popular.

Many stories of the bravery and loyalty of Mudhol Hounds prevail. It is said that about 300 years ago, the Hindu ruler Chhatrapati Shivaji Maharaj was also very fond of this dog. He also included dogs of this breed in his army.

Many stories of the value of Mudhol Hounds are told in the Maharashtra and Karnataka areas. One of them is that these dogs saved the life of Sambhaji Maharaj, the eldest son of Chhatrapati Shivaji Maharaj. Because of this, Shivaji Maharaj was very fond of this breed. He used these dogs extensively in his guerrilla army.

On May 6, 2018, Prime Minister Narendra Modi mentioned the Mudhol breed dogs at a rally in Jamkhandi in the Bagalkot district of Karnataka. Since then, the name has been in the news. Criticizing the Congress, Narendra Modi said: “They (Congress leaders) get sick when it comes to nationalism. Look at the Mudhol dogs, they are full of nationalism.”

On his popular ‘Mann Ki Baat’ show in August 2020, Prime Minister Modi said that these dogs are in every difficult moment and are ready for every army mission. He praised this Indian breed, saying that among the Indian breeds, the Mudhol Hound and Himachali Hound have excellent pedigrees. He also described the Rajapalayam, Kanni, Chippiparai and Kombai dogs as the best breeds.

PM Modi said that Mudhol Hounds have been trained and included in the Army, CISF and NSG dog squads. Kombai dogs have been admitted by the CRPF. He appealed to people to adopt an Indian breed of dog.

Inclusion in the armed forces

In February 2016, the training of Mudhol Hound dogs began for the first time. He was inducted into the Army after 2 years of training at the Remount Veterinary Corps Training Center (RVC). Labradors and German Shepherds of foreign breeds are already regularly trained at this training center.

The main instructor, Colonel Jaivinder Singh, said that this breed of dog is capable of attacking its target just by reading the eyes of the trainer. Mudhol Hound trainer DK Sahu said they initially receive 3 weeks of basic training, followed by 36 weeks of training.