Delaware First: The Gift of Security 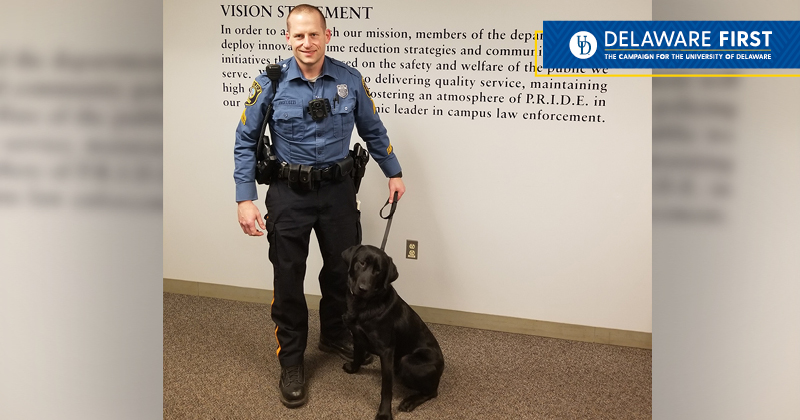 Photo courtesy of the University of Delaware Police Department
April 05, 2022

As a mental health advocate and social worker, Robin Gordon, whose daughter Brianna is a senior at the University of Delaware majoring in communication, knows firsthand how dogs can be more than just loving and loyal pets. Two of their own are trained as therapy dogs who help comfort and relieve people’s stress at institutions in her hometown, such as the Westchester County, New York, Department of Correction and several regional medical centers.

When Gordon had the opportunity to support a new canine officer at the University of Delaware Police Department (UDPD), he “fit in perfectly” with his personal experiences and love of dogs, as well as his high respect for police officers. police.

“Police officers risk their lives every day; They truly are heroes who deserve our support,” Gordon said. “The amazing dogs that work with them have an important job to do, but they also help reduce stress in intense situations.”

As the parent of a current Blue Hen, Gordon knows the important role that parent and family philanthropy plays at UD, enhancing and growing programs, experiences and opportunities for students, while bolstering the efforts of Delaware First: The Campaign for the University of Delaware. In addition to UDPD, he has donated to help improve resources and programming at the University Wellness Center at Warner Hall, which serves as a holistic hub for student health and wellness. Gordon said he strongly believes in “supporting those on their journey to mindfulness and wellness,” both through the work he does every day and through donations from him.

Your latest donation to support the canine unit’s newest member, Shadow, helps the UDPD grow the department, building and improving the important work they do across campus. Without the funding and the new dog on the force, the UDPD would not be able to fulfill its vision of the canine unit and expand its security measures. The unit was created about a decade ago, starting with two German Shepherds trained in patrolling and explosives detection, and the needs have changed since then.

“Our goal has been to have a total of four dogs,” said Chief Patrick Ogden, who oversees the University’s 54 police officers and four canine officers. “Lately, as the original canines have aged, we have begun to research breeds and re-evaluate our security needs. We were still missing one dog and then, thankfully, Mrs. Gordon’s generosity came through for the fourth dog and its associated start-up costs such as fencing, kennels, leashes and collars.”

Funding from the university completed the package, allowing for the purchase of a specially equipped vehicle, equipped with cameras, computers, defibrillators, and a cage and cooling system for the dog. These canines come with special training, but Ogden notes that the Delaware State Police provides a free three-month course for the dogs to receive national certification. In return, the University’s dogs are on call as backup to serve the state, if needed.

As part of their training, the dogs are taught to distinguish explosive materials from others using tennis balls that jump when they choose correctly.

“They go through this hundreds and hundreds of times, so they associate detecting the scent with receiving an award,” said Corporal Harley Angelozzi, the officer paired with Shadow.

Angelozzi has been with the varsity force since 2008 but is new to the canine unit. Shadow lives with him, his family, and his American bulldog. While the experience is similar to bringing a pet home, Angelozzi and Shadow also spend their days working on the University grounds.

“He’s with me 24/7, and most of the day is spent walking around campus as part of his exercise routine,” Angelozzi said. “Students love to greet him and everyone wants to pet him. Labs are very friendly, put everyone at ease, and are great for community relations.”

That doesn’t surprise Gordon, who understands all too well the mutual benefits of the special bond between canines and humans.

“It’s a win-win-win,” Gordon said. “The dogs love it, the people they meet love it, and their handlers and owners love it.”

For more information about the impact of parent and family donations on UD, contact Tracy Smith at smitht@udel.edu or 302-831-7453.

Delaware First: The Campaign for the University of Delaware was publicly launched on November 10, 2017. The comprehensive engagement and fundraising campaign unites Blue Hens from across the country to accelerate UD’s mission of cultivating leaders of the tomorrow, creating solutions for great challenges, inspiring innovations and transforming lives. The joint effort will help create an extraordinary student experience at UD and extend its impact in the region and the world.

Building on the unprecedented support and generosity evidenced by the Campaign, on October 7, 2021, the University announced the Delaware First extension with a $1 billion goal to further drive change and innovation for students. , the faculty, the campus and the world.