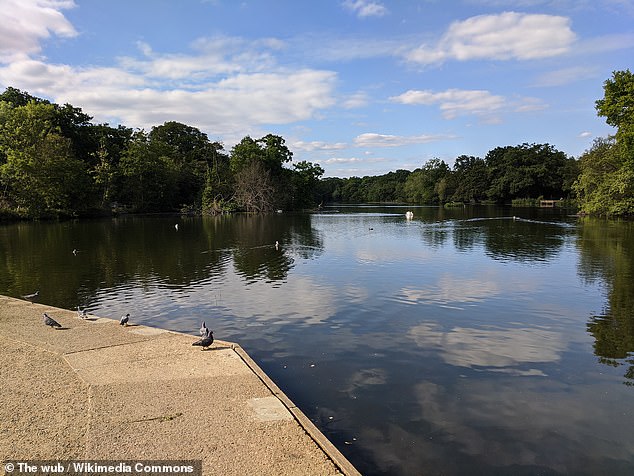 By Laurence Dollimore for Mailonline

Toxic algae is believed to be behind a series of dog deaths in East London, prompting an urgent investigation and health warning from local authorities.

Visitors to Highams Park Lake, in Epping Forest, Chingford, have been told to stay out of the water until tests are carried out on the potentially deadly blue and green algae blooms.

It comes after a “number of dogs” are believed to have died after drinking from the lake in recent days.

“The Council has been made aware of the deaths of a number of dogs after they (believed) drank from Highams Park Lake.

Autopsy results show the presence of a toxic blue/green algae.

“The City of London Corporation, which manages Epping Forest, is warning visitors not to swim, fish or take dogs into the water at Highams Park Lake until testing for suspected toxic blue-green algal blooms is complete.”

Since then, Epping Forest has advised dog owners to take drinking water with them on their walks.

Visitors to Highams Park Lake (pictured), in Epping Forest, Chingford, have been told to stay out of the water until tests are carried out on potentially deadly algal blooms. 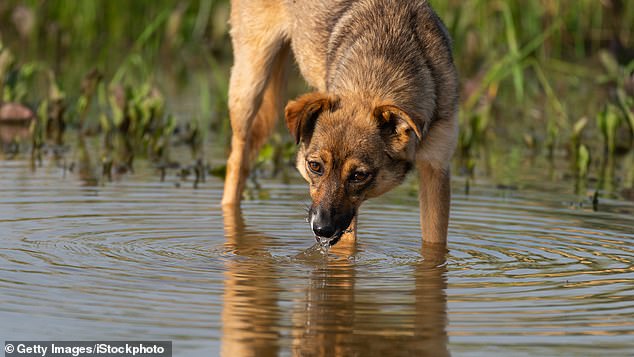 It said: ‘Are you taking your canine companion for a walk in Epping Forest?

“Be careful around water and do not allow dogs to drink or swim in any of the ponds or rivers.”

‘The quality of the water is not controlled. Please bring drinking water for your dogs with you.’

It comes after rising pollution levels in Britain’s rivers sparked health fears among wild swimmers this year as the 19th-century pastime made a comeback.

What are toxic blue-green algal blooms?

Cyanobacteria, also known as blue-green algae, are an ancient class of organisms that create the blooms that are present almost everywhere water is found, but thrive in warm, still bodies like lakes and ponds.

It includes species that produce some of the most powerful toxins known to man, and their impact on humans is only partially understood.

The incidence of freshwater harmful algal blooms (FHABs) has increased in recent years, with some scientists attributing the increase to climate change. 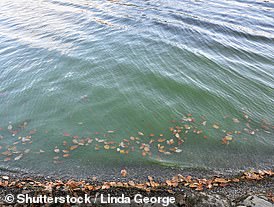 Algae are capable of producing several different toxins. People can be exposed to these toxins through skin contact (eg, by swimming), by inhalation (eg, by motor boating or water skiing), or by swallowing contaminated water.

These toxins can cause skin rashes, vomiting, stomach pains, fever, and headaches.

Occasionally, they can cause more serious conditions, such as liver and brain damage.

Not all blue-green algal blooms and scum are toxic, but you can’t tell by their appearance, so it’s best to assume they’re harmful and take precautions.

Children are at greater risk than adults of developing problems due to their comparatively lower body weight,

The growing resurgence of the bathing trend in Britain’s lakes and rivers has been highlighted during recent heat waves, as Britons seek to cool off in scorching temperatures, which are expected to hit 30 degrees this week.

But the resurgence is not without risks, and comes after the government recently introduced more flexible regulations on the discharge of wastewater in the Environment Law last year.

It has raised fears about the health risks of swimming in the country’s lakes and rivers, with a recent parliamentary report finding that none are free of contamination.

And Environment Agency bosses have even touted the prosecution of water company executives who they say have contributed to the sector’s worst performance for years.

Its annual environmental performance report, published last month, said serious pollution incidents in the UK rose to 62 in 2021, the highest total since 2013.

President Emma Howard Boyd said at the time: ‘It is appalling that the water companies’ performance on pollution has hit a new low.

‘Water quality will not improve until water companies monitor their operating performance.’

The Conservative government was widely criticized when the Environment Act passed last October included a provision allowing water companies to dump sewage into bodies of water across the country.

Some 265 MPs voted with the government to reject a House of Lords amendment to ban the discharge of sewage as part of the bill.

A report by Parliament’s Environmental Audit Committee concluded that not a single river in England is free from pollution, with waterways polluted by a “chemical cocktail” of raw sewage, sludge, oil, microplastics from car tires and wet wipes. .

The committee singled out agriculture and then water companies as the biggest contributors.

The committee, which spent months taking advice from experts, warned that the pervasive pollution poses a risk to both the environment and human health.

The UK’s waterways are used for fishing, swimming and other sports, but bacteria derived from sewage and sludge risk making river users seriously ill.

And the harmful input of chemicals, microplastics and excessive amounts of nutrients are harming river wildlife and causing harmful algal blooms.

In particular, the audit committee criticized government inaction and budget cuts that are tying the hands of the Environment Agency in the fight against pollution.