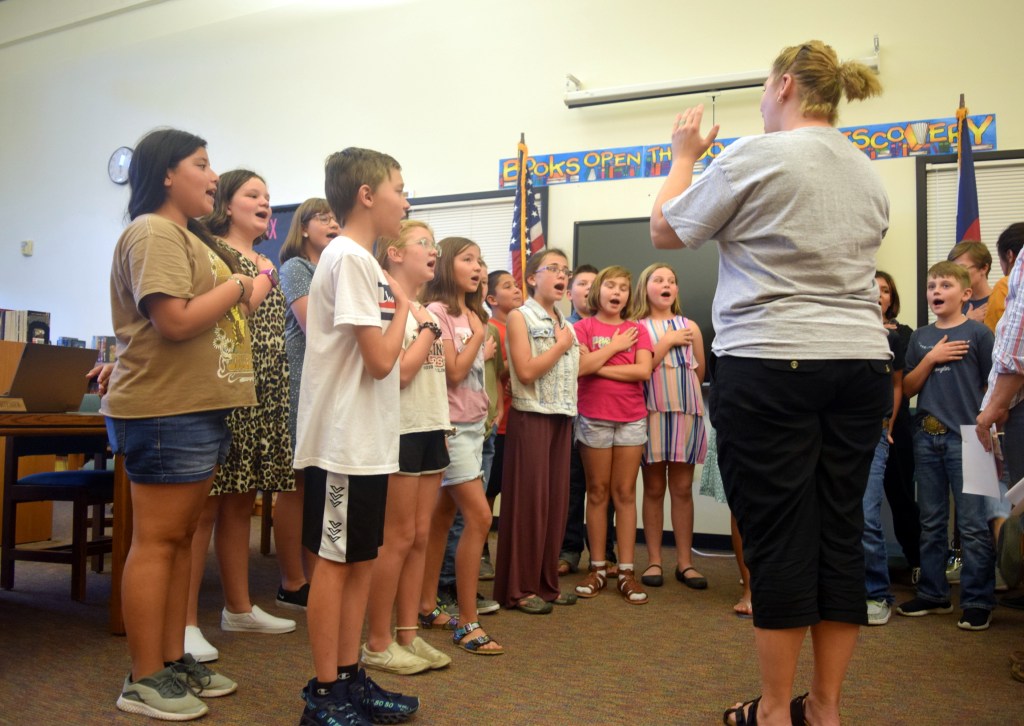 The RE-1 Valley School Board had a tour and dinner at Campbell Elementary on Monday as part of its regular meeting.

As Interim Superintendent Dr. Martin Foster has assumed leadership of the district, one of his goals is for the board to implement school visits back into their meeting schedule, which is why they will be visiting every school in the district in the coming months. Campbell was the first of those visits.

During a tour of the school, the board learned about some of the things going on at Campbell. Kaitlynn Prelle, Social Emotional Learning Specialist, spoke about her work and shared that this is her first year at Campbell, last year she was part of the district configuration, but spent most of her time at Sterling Middle School. She said it’s been a nice change of pace being in elementary school.

“The biggest thing when I came here was how do we make things valuable and how do we make them productive with social-emotional services, because it seems like last year and the year before that it seemed like a lot of crisis work and I was really hopeful that we can get away from that,” Prelle told the board.

His main goals at Campbell have been to create a clear and effective model for SEL services, using the referral process, documentation, data maintenance, service plans, etc., and helping educators identify at-risk students, “Which has been a lot easier this year because we started doing 30-minute SEL lessons for every class in the building once a week, so all the kids get some type of SEL service,” Prelle said.

Inside the classrooms, teachers are using the Capturing Kids’ Hearts program, while Prelle and Mikayla Guenzi of the Centennial Mental Health Center are providing weekly lessons using BOTVIN and Riding the Waves this semester and will switch to Sources of Strength next semester. which will go a long way for students, as Sterling Middle School focuses primarily on SOS. Prelle has also been working with Janine Balenti, who deals with conflict mediation.

Other upcoming programs include Watch DOGS, peer mediation, and a fifth grade leadership group starting in October to help prepare students to move on to middle school. During the board meeting, Principal Brenda Kloberdanz explained that fifth graders will apply and nominate others to be playground mentors for third graders; Those selected will need parental approval.

“If there is a conflict between those students, they will have clipboards and a set of questions to help students troubleshoot to the best of their ability and communicate with each other to resolve conflicts instead of going to the teacher or getting frustrated with each other,” he said. . he said she. “That will help build leadership and mediation skills in our fifth graders as they transition to middle school.”

Kloberdanz also shared this year’s building goals, which include continued implementation of Capturing Kids’ Hearts, which helps build positive relationships, improve attendance, and improve responsibility and achievement. Teachers had refresher training on the program on Monday.

Regarding staff and student highlights, Kloberdanz shared that fifth graders are taking responsibility for flag duty before and after school with training provided by VFW on how to hold the flag and how to respect it.

Upcoming school events include the first School Accountability Committee meeting on September 26, two parent involvement nights, Pumpkin Patch Night on October 7 from 5:30-7 pm, and a Mele Kalikimaka craft night on December 20, and a fourth grade concert on November 17 at 7 pm on SMS.

Earlier in the meeting, the board enjoyed a musical performance by 18 fifth graders who sang the “National Anthem” and “God Bless America” ​​under the direction of Janelle Lambrecht. They will reform the second song during the Veterans Day celebration on November 10. As part of that celebration, students and staff are asked to name a member of the military or veteran they would like to honor.

In other business, Dr. Foster shared some good news, although he had never seen it happen before the district’s enrollment actually increased from its initial attendance report earlier this month. On September 7 he reported a total headcount of 1,980 and as of September 16, enrollment is 2,014.

SMS and Sterling High School reported significant increases, from 391 to 405 and 411 to 435 respectively. Dr. Foster said that the schools had a number of students coming in and signing up after Labor Day.

October 3 is the district’s official count day; the number of students enrolled at that time will determine how much funding RE-1 will receive from the state.