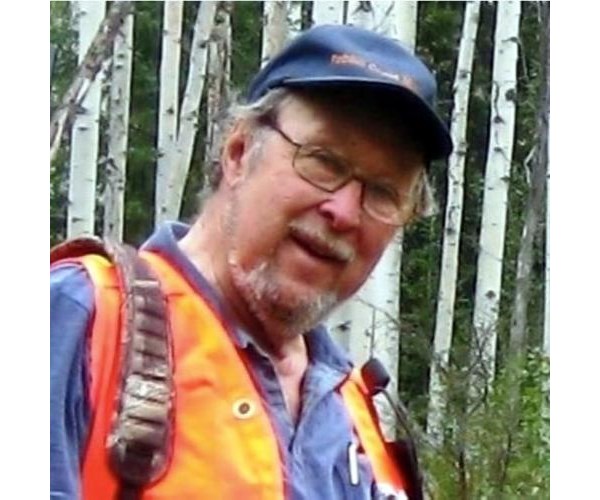 Andrew Emmet Nevin was born on April 4, 1939, in Dayton, Ohio, USA, the eldest of five children born to Robert Andrew Nevin and Virginia Hazel Leland Nevin. He passed away on March 26, 2022 in Mission, British Columbia, Canada. His life was one of geological adventures, world travel and stories.
Andy moved his family from Dayton, OH to Syracuse, NY, in 1949, and then to Fayetteville, NY in 1955. The house in Fayetteville was designed by his dad, but it was completely unfinished when the family moved there. Many of the walls were just framing. You could see into the upstairs bathrooms from the front door. As a teenager, and for the next 10 years, Andy and his brother helped their dad complete the house and were expected to spend most of their free time cajoling, plastering, tiling, grouting and painting.
Andy graduated from Fayetteville-Manlius Central High School in 1957. He kept telling his teacher he was late because of the bus, until she looked up his address, just a block from the school!
He received a B.Sc. in 1961 in Geophysics from St. Lawrence University, Canton, NY, where he was a member of Beta Theta Pi and president of the Interfraternity Council. He married Stephanie Gott in August 1961 and they headed west to California where he received his Master’s in Geology from the University of California at Berkley, CA and then to Idaho where he received his Ph.D. in Geology, Mining Engineering and Statistics. from the University of Idaho in Moscow, ID. Andy and Stephie had their first child, a daughter, while he was at Graduate School in Idaho. His next two children were born three and four years later in Arizona when Andy was working for Phelps Dodge Corporation with copper in Douglas, AZ, just a few blocks away. from the Mexican border. Andy became fluent in Spanish at that time, something that would serve him well in the future.
In 1969, Andy moved his family to North Vancouver, BC, Canada to join a friend from college and start a lifelong career in mineral exploration. His youngest child was born in Canada. He started his own company, Nevin Consultants, Ltd, mapping copper resources near Port Hardy, BC. He later merged with two other geologists to create Nevin Sadlier Brown Goodbrand (NSBG) Ltd. Andy and his partners were instrumental in discovering and mapping the hot young Meager Creek system northwest of Pemberton, BC in the 1970s for their feasibility as geothermal energy for BC Hydro. and the Province of British Columbia. His pioneering work with geothermal energy has been nationally recognized by Geothermal Canada.
His consulting work with NSBG began to spread throughout British Columbia and the United States, specializing in exploration for heavy metals, including gold, silver, molybdenum, nickel, zinc and other metals in Alaska, Wyoming, Montana, Idaho, the state of Washington. , California (and even Tanzania, Africa).
In 1983 he married his second wife, Jennifer Anderson, and soon after began consulting on his own again. His experience evolved to include helping underdeveloped nations explore potential metal deposit resources. He often lived in the countries with which he consulted. These included, China, Colombia, Costa Rica, Mexico and living for seven years in New Delhi, India, consulting at a site in North India on the Tibetan border. Even when he was “home” in North America, Andy moved frequently, living in San Francisco and Grass Valley California, Chicago, Illinois, Vancouver, Surrey, and finally Mission, BC. He had friends and colleagues all over the world. He was a skilled traveler and very clever with border crossings.
In addition to being good at languages ​​and math, Andy was musically talented and a skilled draftsman. He could take any instrument and “play with it” for a moment and then recreate songs from the radio. Andy once took a bagpipe singer to a mining camp and one summer he learned how to play it using only the instruction booklet that he came with the bagpipe singer. He was an avid reader and particularly enjoyed historical fiction and biographies of any kind. He was quick with a long story, had a dry sense of humor and an easy laugh. Postcards from him to his children when they were younger always included a cartoon, and sometimes just a cartoon.

Andy was still consulting in his late 70s, when a health condition forced an “early” retirement in 2020, in Mission BC. He passed away peacefully in his sleep on March 26, 2022.
His parents predeceased his ex-wives Stephanie Gott Nevin, Jennifer Anderson Nevin, and his beloved sister Hazel Nevin Newton. He is survived by his children, Molly Nevin, of Fairbanks, Alaska, Doug (Zlatica) Nevin of Hanapepe, Hawaii, Mark (April) Nevin of San Francisco, California, and Tom (Lisa) Nevin of Kamloops, British Columbia, as well as his six grandchildren, Taylor, Abe, Mia, Claire, Samuel and Maci, and by his brother Robert Nevin of Fayetteville, NY, and his sisters Ginit Marten of Niskayuna, NY and Mary Petrie of Cumming, GA.
No funeral services are planned at this time, his family will gather later this year to share stories and scatter his ashes in a place that was meaningful to his dad. For those who would like to participate in something in memory of Andrew Nevin, the family suggests getting out there, taking a hike, looking at rock formations with some wonder at the kinds of treasures found within, supporting geothermal energy development, responsible mineral exploration, world travel, dogs, and american college football. He will be missed.